1968 : James Earl Ray was arrested in London Airport on charges of conspiracy and murder in connection with the assassination of civil rights leader Dr. Martin Luther King, Jr.

1924 : The Japanese Cabinet has resigned as a result of the party being defeated in elections.

1932 : Some of the widest range of tax reforms and increases are to start over the next 4 months and should bring in over 1 billion dollars to the US treasury each year to help balance the budget after major spending on welfare programs for those unemployed due to the depression, among the large number of new taxes are New Electricity Tax, and special excise taxes on soap, automobile tires, chewing gum, new admissions tax at movie theaters and sports venues, gift tax and higher personal taxes from next March.

1942 : Bing Crosby recorded "Adeste Fideles" and "Silent Night." He also achieved a great deal of fame with his popular rendition of "White Christmas."

1949 : An FBI report names a number of Hollywood stars including Edward G. Robinson members of the Communist Party.

Known For : Kennen Ivory Wayans is an American comedian, actor, and filmmaker. He is a part of the Wayans family, several members of which have pursued careers in comedy and the entertainment industry. Members of his family often appear in his films and help with production or writing. Kennen Ivory Wayans is most notable for hosting the sketch comedy television series "In Living Color" from 1990 to 1994. He is also known for directing the films Scary Movie, Scary Movie 2, and White Chicks.

1953 : The Supreme Court ruled that restaurants and bars in Washington D.C. are required to serve African-American customers.

1965 : America's position on support for the South Vietnamese government changes when the state department issues a statement that American forces would be available for combat support together with Vietnamese forces when and if necessary.

1967 : During the Six-Day War, Israeli aircraft and torpedo boats attack the USS Liberty in international waters off Egypt's Gaza Strip.

1972 : The Pentagon has announced plans to develop a completely new type of Nuclear Missile that could be launched from a submarine and flown like an aircraft flying below 500 ft to avoid radar detection to reach it's target, this is part of the ongoing Cruise Missile development.

1978 : Naomi James breaks the solo round-the-world sailing record by two days with her 53 ft yacht Express Crusader when she crossed the finish line in Dartmouth taking 272 days to complete the record.

1982 : Argentine aircraft attack the supply ships Sir Galahad and Sir Tristram in the Falklands. The British troops have 7,000 Argentinean troops surrounded and are asking them to surrender to save further bloodshed at Port Stanley in The Falkland Islands.

1987 : The secretary "Fawn Hall" to national security aide Lt. Colonel Oliver North testified at the Iran-Contra hearings, saying she had helped to shred some documents. She had testified in exchange for immunity from prosecution.

1998 : The three surviving members of the Beatles are reunited for the Memorial Service of Paul's wife Linda who died earlier this year from breast cancer. Many other stars turned out to pay tribute to Linda McCartney including Elton John, Spike Milligan, Joanna Lumley, Pete Townshend and Sting.

2001 : Tony Blair and the British Labour party are elected to a second term winning 413 seats against the Conservative party with 166 seats and the Liberal Democrats winning 52 seats giving the Labour party a majority of 167 overall in the house of commons.

Known For : Tim Berners-Lee is one of the founders of the World Wide Web. He started its infrastructure while he was at CERN, the European Particle Physics Laboratory, and created the first web client and server in 1990. The Web's HTTP (HyperText Transfer Protocol), HTML (HyperText Mark-up Language) and URL's (Uniform Resource Locator's) have spread from this. He had been a student of physics at Oxford, and build a computer in his spare time. His initial use of the Web was to create an access to the increasingly large amount of data that CERN held, and it was never intended for public release. He worked for a time in England, before returning to CERN and continuing the distribution of information on a global network. In 1991 he created a Web browser and the the Web's ability to communicate through newsgroups. Increasingly popular, the Web had more and more servers available. The need for the public display of information was vital with the overly-numerous queries that were made, and Marcs Andreessen built what became the most common types of browser (such as Internet Explorer). In 2003 Berners-Lee was awarded a knighthood.

2001 :Tropical Storm Allison has now been affecting Texas and Louisiana for the last three days with winds over 60 MPH leaving 22 people dead and massive flooding in the area.

2002 : The meeting in Camp David between Egypt's President Hosni Mubarak and President Bush does not reach agreement as Mr Mubarak is pressing for a timetable for the creation of a Palestinian state and Mr Bush has said Yasser Arafat must do more to prevent attacks on Israelis by Palestinian militants, before a timetable can be put in place. Meanwhile three Israelis were killed and four others injured in two separate attacks by Palestinian militants on Jewish settlements and Israel continues its "siege" of Palestine including carrying out house-to-house searches.

2007 : The first president of Somalia, Aden Abdulle Osman, who was elected in 1960 when British and Italian colonies joined to create the country of Somalia. Osman was also the first African leader to voluntarily give up power after his defeat in the 1967 election. Osman was ninety-nine years old and died in a Kenyan hospital after being in a coma, family had stated that Osman had wished to see Somalia achieve a peaceful state.

2008 : A meeting of the world's leading industrialized nations have met in Japan over concerns that the continued soaring oil prices ( $139 a barrel ) could damage the global economy. Currently G8 members are pressing OPEC members to increase oil production who seem reluctant to increase production which would bring the price of oil down, OPEC have stated no decision will be made until the scheduled meeting in September. 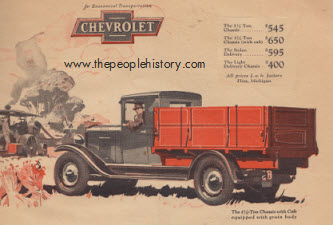 1929 Chevy 1-1/2 ton Truck
Price $545.00
The late 20s Chevy trucks were based on a 6 cylinder engine with four speed forward transmission and one rear gear, 4 wheel brakes

From our 1920s Furniture Page 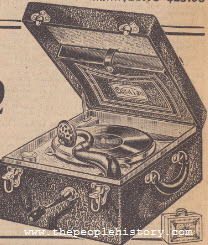 Portable Phonograph
Price: $29.00
A Portable Phonograph from the late 20's, unlike many of the other 20s items , you can find these for sale at reasonable prices at most antique fairs, I included this as they were found and used in so many homes to play music.

2009 : A North Korean court sentenced two American journalists to twelve years of hard labor after being convicted of entering the country illegally and committing "hostile acts'. Euna Lee and Laura Ling were arrested in March after crossing the border with China while working on a story about refugees for Current TV.

2011 : Eleven people were killed after gunmen attacked La Victoria drugs clinic in Torreon, Mexico. The drug treatment center located in the Northern state of Coahuila, was attacked for unknown reasons, but police stated it was likely the work of hitmen related to the drug gangs in the area.

2012 : The Japanese camera and medical supply maker Olympus stated that they planned on cutting 2,700 jobs as part of an effort to restore its financial health. The company was also planning on cutting its number of worldwide factories to 18 from 30, and reducing its overall workforce by seven percent over five years.

2013 : Former South African president and leader of the fight against apartheid, Nelson Mandela, was admitted to a hospital in South Africa in serious condition. The ninety-four year old had been suffering from a lung infection and representatives state that he had been stabilized.