Below are example's for each decade 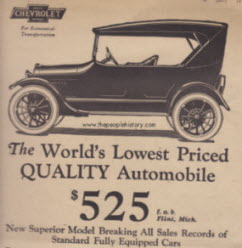 
Back in the 1920's following Fords automation of the car industry, Chevrolet was the biggest and most successful competitor, they were sold at a higher base price but many additional extras that were required were built in to the price making them competitive.

Brief History of the Motor Car

Karl Benz is credited with the invention of the first Automobile in 1885 but many other inventors were working on the Horseless Carriage at around or even earlier at the same time scale.
Among other items Karl Benz invented for his first production car were the carburetor, the accelerator, the spark plug, the clutch, the gear shift, and finally the radiator to keep the engine cool which allowed him to sell production cars in 1888, in the beginning his cars were 3 wheelers but as he continued refining his design the first 4 wheel car appeared in 1893.

But for the next few years the car was still hand built and only available to the very rich but in 1908 Henry Ford changed everything by making the car affordable to a much wider audience ( The Middle Class ) through the use mass production on assembly lines, this meant the people building the cars did not have to be as highly skilled engineers or craftsman as each man worked on a specific area of the car. The car that created this was the Ford Model T and by 1910 12,000 Model T's had been made and sold and they could not keep up with demand. To help with saving money on production most Model T's were only made in black but some other colours were used occasionally.
As they continued to refine assembly line production Ford managed to bring the time to build a car to only 93 minutes and at one stage 9 out of every 10 cars driven on the roads throughout the world were Fords.
Over the next few years new manufacturers appeared some creating mass produced cars with designs changed reflecting the tastes and styles of the consumers, At the same time a number of well known manufacturers catered to the super rich with ever faster and more quality refined super cars which are so desired by collectors the world over.
Around the world Car makers appeared who catered to their own consumers in UK including Austin and Rover, France including Peugeot and Renault, Sweden with Volvo and Saab and Germany with BMW and Mercedes Benz, but Ford were one of the first companies to become a global brand. But in the late 1970's a new breed of Car manufacturers appeared and the Japanese invasion started , at first they were renowned for cheap and poor quality but in a very short time they have learned from their mistakes and Toyota and Honda are among the world leaders if not the Top in car sales worldwide and some of the leaders in innovation with Hybrid Cars. And as a consequence some of the older car makers have now disappeared or have been swallowed up by the truly global manufacturers.
Over the last 20 years after each oil crisis and the cost of petrol increasing the cars we drive are becoming smaller, sometimes through consumers demanding better fuel economy and others through government initiatives or major innovation in more efficient use of fossil fuels. In general cars have become more fuel efficient and the use of the latest generation of technical engineering to improve fuel efficiency by stopping the engine running when car is stationary and auto starting as accelerator is pressed and Hybrid technology which allows the car batteries to charge when in motion and using batteries when in traffic not only help with fuel efficiency but also pollution.
In 2005 63 million cars and light trucks were produced worldwide
Changes that happened with car engineering, safety and comfort, providing a timeline of how we got to where we are today.
Top 10 car manufacturers together with brands they market or hold significant shares