Every decade has its signature home design attributes. The 1970s was no different. During this era emphasis was place upon choosing modern styles of home furnishings as well as designing homes that most likely have included wall design patterns that were thought to be a bit bazaar.
Additionally, new man-made materials were being used as well which helped lower the cost of furnishings and decor. You will learn more about the phenomenon of 1970s home building and design as you read on.
Attributes of a 1970s Home
Paneling was often used in the family room but it was most likely also used in basement rec rooms as well as bedrooms. Ceramic was used in the tiling of bathroom floors and often one and a half baths or two complete bathrooms were built in each home.
Mobile homes were becoming more popular as well, and usually cost less than the price of a regular home. Usually they were not built with as strong of a foundation, However, many people still preferred them over other types of homes. Besides, by this time mobile homes were becoming safer and safer to live in (with more improvements yet to be made).
Duplexes and triplexes were being built during this time as well. More advertisers and developers were catering to couples and singles with no kids. Homes with enclosed patio or garages were offered quite often as well.
Heating and Cooling in the 1970s
Many homes were cooled with air conditioning, and numerous homes were heated with electric heat. Gas heat was also used quite often.
Characteristics of a Kitchen
Kitchen cabinets and/or faces of refrigerator and freezer doors of this decade were made into a style representative of cathedral design. The photo below will give you a better idea of what a 1970s kitchen may have looked like: 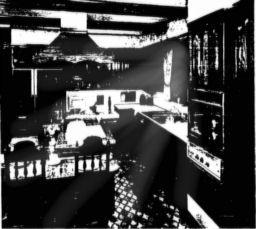 Kitchen appliances ran on either electric or gas. Kitchens of this time were often equipped with state-of-the art appliances such as up-to-date stainless steel stoves, microwave ovens, and/or dishwashers. As always, designing a home kitchen with adequate storage and counter space also was a priority during this time.
Recreation Kitchens of 1975
A trend of the mid 1970s was to built a second easy-to-clean recreation kitchen onto homes. This was a room designed mostly for men of the times to clean hunting and/or fishing game. It could possibly have been used for those who were hobby mechanics as well.
Please take a look at the brick wall that was used in the construction of these rec kitchens:

This type of brick pictured above was also used for building the stairs of this hobby kitchen, and these stairs sometimes were design to lead to a pool. An additional feature of these kitchen includes the indoor/outdoor carpeting that is installed.
Unique 1970s Furniture Styles and Modern Interior Designs
In a 1970 issue of a local Long Beach newspaper, furniture is described as such that "dares to be different". Although some styles of furnishings and decorating of this decade may have been used in earlier times there is definitely something to be said for this particular era in history. Tastes in home decor have changed dramatically during this time, as you can tell of the photos below.
The first picture displayed is of a typical dining room that was designed in the 1970s. Please take a look at the following image:

The original color of the chairs seats pictured above are bright green. However, the body of the chairs and tabletop are transparent. The chairs along with parts of the table (most likely the base) are made of plexiglass while the table top is more than likely made of glass.


Notice also the multi-colored wall covering that was typically placed on dining room or kitchen, or walls during these times. It it conceivable to assume that these retro or psychedelic patterns were also sometimes used on living room or bedroom walls during this decade as well-depending upon the taste of each individual or family.
Another popular item in the 1970s was furniture that was made from vinyl materials. For instance, take a look at a photo of this L-shaped couch:

Moreover, couches as well as chairs, tables, and other furniture often was designed with an Italian molding. Additional pieces were popular as bedroom furniture. For instance, take a look at this very useful but attractive lingerie chest in the photo below:
The lingerie chest displayed above is made from andiroba solids and pecan veneers. Additionally, this elegant piece of bedroom furniture is accented with brass bound box lines as well as black and gold silk screening.
Other 1970s furniture was made from a variety of natural materials such as glass, metal, chrome, or wood. Synthetic materials such as different grades of plastic-and of course the already mentioned vinyl were used to create furniture as well.
Additional Furniture Accessories
Various classic and modern designs of lamps, stands, tables and/or mirrors were placed as accents in most rooms-especially in common areas such as dining room or living room. You can view this picture in order to have an idea of what accessories would possibly create a 1970s look. Keep in mind that some of these pieces were also very popular around the turn of the century and were more than likely replicas and/or originals of pieces that were considered to be antique by this time.
Please view the following photo: