Fashion and Accessories of the 1980's

Globalization, Diversification and the Popularization of Fashion
Fashion was rapidly changing in the 1980s and more diverse than ever before. Due to increased globalization of the world and pop culture trends in fashion spread faster than ever and were more widespread. Changes in technology and the expansion of cable television and networks like MTV meant that TV, Movie and Music celebrities' fashion was more accessible to fans and viewers and an increased obsession with celebrities brought fashion into the forefront of pop culture. The fashions and styles during the decade represented more distinct groups than ever before. In the past there would usually be one or two predominant styles at a time, whereas in the 1980s, several separate and distinct groups of trends were all sharing the popularity at one time. 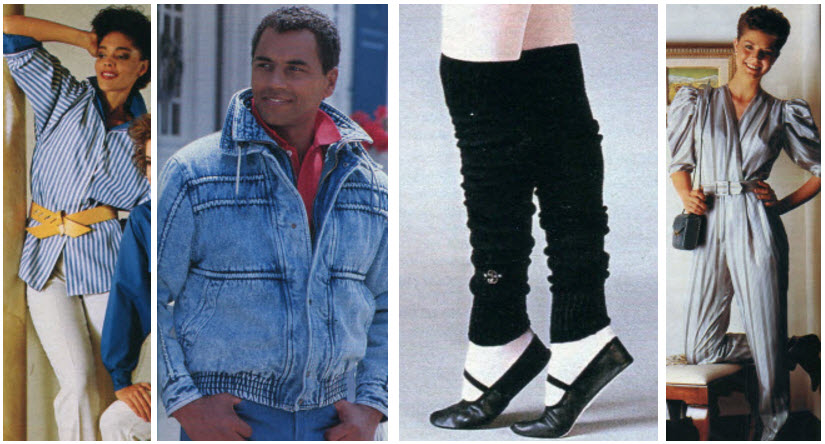 The portrayal of different fashionable groups in movies like The Breakfast Club and St. Elmo's Fire showcased the variety of trends available at the time and it is hard to say whether these movies took their cues from the general public fashion-wise or if the public tried to imitate the fashion from the movies. A general synopsis of fashion and clothing/style trends of the decade include big teased hair or spiral perms for women, mullets or more clean-cut styles for men, baggy and oversized tops, leggings, high-waisted jeans, ripped and acid-washed denim, tight exercise clothing for everyday (leg warmers and spandex), headbands, shoulder pads, boxy silhouettes, large bold prints, and colorful pastels and brights.

Expansion of Wealth, Yuppies and Media Influence
One major change in society during the 1980's was the expansion of the middle class and the creation of a large group of upwardly mobile young professionals known as "Yuppies". This group of society suddenly had more disposable income than ever and was known for their focus on wealth and conspicuous consumption. Fashion was a way for these young business people to display their wealth and therefore became a very important part of their lives. Another trend related to this was the increase of women in the workforce and the effect it had on women's fashion and workplace clothing. Yuppies were known to be focused on the brand of the clothing more so than any other detail. 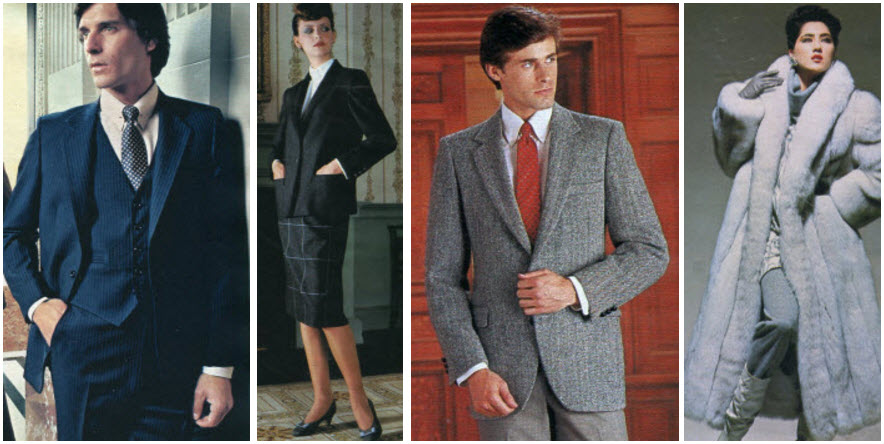 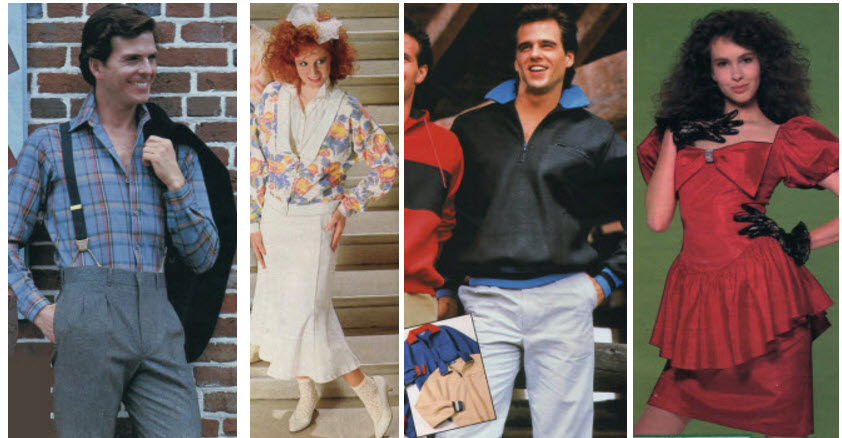 They were also largely influenced by TV shows, MTV, and movies much like the rest of the population. The media influence on fashion of the time was immeasurable. Music videos showcased fashion in a way that had not been seen before and the media started to focus on a new batch of young and interesting celebrities, making the gossip more interesting than ever. As news began to report on celebrity gossip, more and more of the wealthy young stars' daily fashion was featured and personal styles became more and more defined. Young people could then easily head over to the nearest mall and find stylish new clothes to imitate the trends they saw their favorite artists and movie stars wearing in their latest music video, movie, or public appearance. This was also one of the first times that fashion models became celebrities and celebrities became fashion models. Popular stars like Michael J. Fox became brand spokespeople for designers like Calvin Klein. Fashion started to become an integral part of the definition of celebrity and it has become an even more important factor since then. 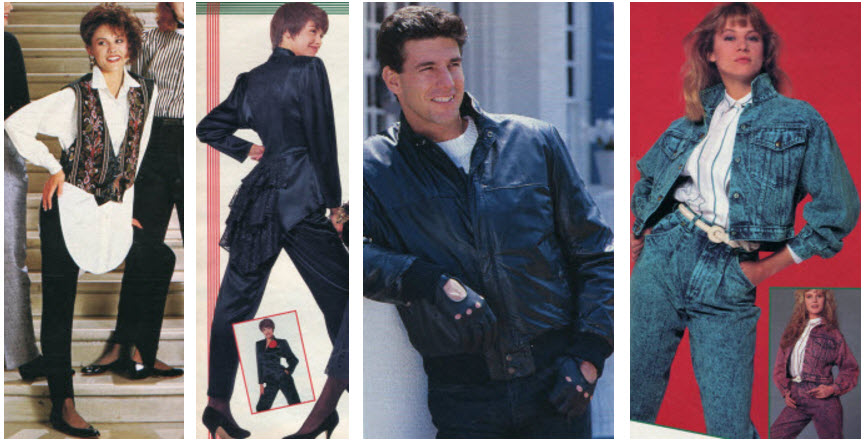 Shopping Malls, Brands, and Fashion Designers
Yuppies weren't the only people with disposable income during the eighties. The middle class expanded and the population, in general, was feeling more wealthy. More disposable income and more personal time meant that people were becoming more obsessed with consumerism and shopping. Shopping centers (malls) moved into the suburbs from the cities along with a lot of the population and a lot of the money. Shops would also employ teenagers who would then spend their income, that they earned working for the mall, at the mall. Malls became an important part of youth culture and as their families moved out of cities and into suburbs they lost things like museums and parks. Malls became somewhere to go and something to do with friends, making it the new social hub of the 1980s. Teens and young adults could model their looks after celebrities and could find all that they needed, fashion-wise, in one place.

This new set of consumers started to become brand loyal more so than any other generation and wearing certain popular brands became a way to make a statement about the type of person they were. Popular brands during the decade included: Ralph Lauren, Calvin Klein, Nike, ADIDAS, Banana Republic, The Gap, Izod, Lacoste, Members Only, and Gloria Vanderbilt Jeans. Another thing to impact fashion at the time was the fact that a lot of high-end designers decided to move down-market and became their own brands, brining high fashion to the masses. Some of the high-fashion designers that were successful during the 1980s include: Ralph Lauren, Calvin Klein, Donna Karan, Azzedine Alaia, John Galliano, Moschino, Giorgio Armani, Dolce and Gabbana, Vivienne Westwood and Jean Paul Gaultier. Musical Tastes' Influence on Fashion
Thanks to the creation of MTV, some fashion trends were directly related to music. New Wave bands, Hair Metal bands, Rap groups and rappers, and Pop stars would often have a variety of styles associated with their music that fans would attempt to mimic. New Wave style included androgynous looking hair and make-up, women in menswear, short hair or asymmetrical cuts, futuristic make-up, square lines, color-blocking and layers. Some artists that exemplified the New Wave look at the time were Cyndi Lauper, Annie Lennox, Boy George, Blondie and Madonna. Hip-Hop style included track suits, sportswear brands like ADIDAS and Nike, Kangol hats, and gold chains and rings. Some artists that were representative of this style were Run-DMC, LL Cool J, and Salt-n-Pepa. Hair metal style included ripped jeans and shirts, tight spandex jump suits, acid wash denim, band T-shirts, big hair for men and women, mullets, make-up for men and women, and leather. Some examples were Poison, Van Halen, Lita Ford and Twisted Sister.