Before Streaming Music, before MP3s….before compact discs…even before cassette tapes….there was hi-fi. Short for “high fidelity,” this is the term given to a high-quality reproduction of sounds or images. With a hi-fi recording, the sound that is reproduced sounds much like the original sound or recording with no excess noise or sound distortion. Hi-fi technology was most popular during the 1960s and 1970s, but the background for it began in the 1920s with the production of microphones and other electronic amplification devices. After World War II, companies began making improvements in sound quality and recording equipment. As a result, the hi-fi technology was the preferred (and basically the only) method for recreating high-quality sound reproductions.

As a leader in the recording industry, Bing Crosby helped to market the reel-to-reel machine as a popular means to create quality recordings of performances. The need for hi-fi also arose because of movies with sounds – “talkies.” Audiences wanted high-quality sound to be pumped through the speakers in the theater to help them have a pleasant movie experience. Even today, many people praise the sound quality of the reel-to-reel machine and its ability to produce high fidelity recordings. During the first few years when it was popular, a reel-to-reel machine could cost consumers between $200-400 and they can still be purchased for approximately that amount today because of their collectible nature. 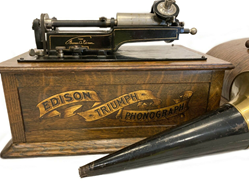 
Invented by Thomas Edison used wax-coated cardboard cylinders example for sale on E-Bay prices range from hundreds to thousands depending on make and condition. The Cylinders can also range in price up to $100's for an unusual or popular artist 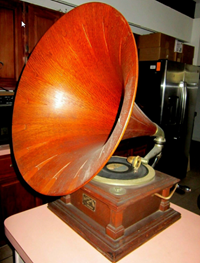 
The 8-track tape was a magnetic-tape sound recording technology that was popular from the mid-1960s to the early 1980s, any boy who had a car in that period most likely had an 8 track player allowing you to play the music you wanted to listen to in the car. I like may others had a player in my cars during that time but oh how I hated it when the tape would get eaten by the machine


From the late 1970s to mid-2000s, the cassette was one of the two most common formats for prerecorded music, first alongside the LP record and later the compact disc

The next major breakthrough in the hi-fi technology was the long-playing record. Although the 12-inch discs were created by Peter Goldmark in the late 1940s, their popularity did not take off until the mid-1950s. One of the major advantages of this product was that it was made of vinyl rather than the other materials that they were previously made with. As a result of using vinyl, the grooves in the record could be smaller which enabled manufacturers and record companies to put more music on one side of an album. With vinyl records, you could enjoy a half hour of music per side. The vinyl also recorded and produced a much richer and cleaner sound that its previous counterparts. For this reason, it was very popular among classical music fans who enjoyed the lack of scratches and other fuzzy noises with their listening enjoyment.

These new larger discs played at 33 1/3 RPMs (revolutions per minute) which also helped contain more material on each side. With its popularity, it has become the primary use for recording and listening to music in the 20th century. Even today, many popular musical acts release vinyl LPs for people who continue to enjoy this medium. Pearl Jam’s Vitalogy album in the late 1990s is just one of many examples of this. Throughout the 1960s, you could buy a vinyl LP for less than $2.00. Today, however, most of them cost over $10.00 and some could cost thousands depending on how rare it is.

Currently, people are turning to compact discs and MP3s for their high-quality recordings and playback. With the digital technology that has flourished in recent years, it has become the preferred method for music, movies and other recording needs. With the affordability of digital quality sound, you can enjoy surround sound and other capabilities from the comfort of your own home. Though many people now prefer digital quality reproductions, others still stand by the quality produced by the earlier methods of reel-to-reel and vinyl LPs. Ideally, the method of high-quality recording you choose to enjoy is a matter of individual preference