November 2nd, 1957: Residents of Levelland, Texas reported sightings of unidentified flying objects with bright lights. After the sightings, Jim Lee, head of the Interplanetary Space Patrol, predicted that the UFOs will soon come in large numbers for all to see and the skeptics will have no choice but to agree.

British Foreign Secretary Arthur James Balfour "The Balfour Declaration" submits a declaration of intent to establish a national home for the Jewish people in Palestine.

The nature of American presidential elections was of great interest to France. Along with information about current elections, French news publications displayed portraits of past presidents from Washington to Wilson. The purpose of this was to compare and contrast French and British presidential branches of government with that of the executive branches of America.

200 people are arrested in a raid on the Union of Russian Workers . Palmer Raids Timeline

Haile Selassie is crowned Emperor / "King of Kings of Ethiopia" at Addis Ababa's Cathedral of St. George in a lavish ceremony attended by royals and dignitaries from all over the world.

The Soviet Union announced that the country would not export wheat during this year, and most likely not the following year either. This decision was announced after a recent trade agreement signing between France and the Soviet Union.

The march to London by the Hunger Marchers Army has been broken up by police in Trafalgar Square and the marchers have been dispersed and escorted out of London . The main communist organizers have been charged with sedition and are currently in jail.

The BBC Television Service, launches becoming the world's first regular public television service with a high level of image resolution from Alexandra Palace transmitter in London with a radius of 25 miles, later renamed BBC TV and finally as it is today BBC One . The service has been in continual service since 1936 except during World War II ( 1939 - 1946 ) when it was taken off the air.

Reports of bombings, raids, attacks, and more were made. These particular violent actions occurred in places such as Berlin, Germany as well as in Greece. It was predicted during this time period that World War II was not likely to end soon (would be a "long war").

The worlds largest aircraft Howard Hughes Flying Boat ( The Spruce Goose ) which took 5 years and cost 25 million to build was floated into the harbor for the first time today.

6,000 British troops have arrived at Fayid in the Canal Zone of Egypt and many more are on the way in an effort to quell anti-British disturbances in the region, the fighting continued for the next 2 years when a military coup in 1952 ended the period of constitutional monarchy in 1953 and Arab nationalist Abdel Nasser came to power in 1954. In 1954 Nasser nationalised the Suez Canal taking it into Arab control provoking an invasion by Israeli and Anglo-French forces, which were forced by the UN to withdraw.

Even if Middle Eastern countries such as Syria, Jordan, and Lebanon could not reach an agreement with Israel, the United States agreed to sign treaties with these countries. Likewise, the U.S. also planned on signing a separate pact with Israel that would most likely not include Syria, Jordan, and Lebanon. An agreement was needed before the development of both sides of the Jordan River could take place. The Arabs refused to negotiate directly with the Jews regarding this project.

The first section of the M1 motorway, the first of it's kind in the UK, is opened between Watford and Crick/Rugby along with the motorway's two spurs the ( M10 motorway to St Albans ) and ( M45 motorway Coventry )

Penguin Books is acquitted of the charge of publishing obscene material in the case over Lady Chatterley's Lover, by D.H. Lawrence.

A total of 100 people had already been counted dead while rescue workers carried on. Thousands more were found homeless. The hurricane occurred along the British Honduras coast, and hit against areas such as Belize, Stancreek, Turneffe Cay, and Caulker Cay. Waves as high as 20 feet had hit government buildings and had destroyed a prison

A man dies when he sets himself on fire to protest Vietnam War in front of the Pentagon. His widow said he gave his life protesting our government's deep military involvement' in Viet Nam,"

Cuban Adjustment Act comes into force . The full act is shown below. 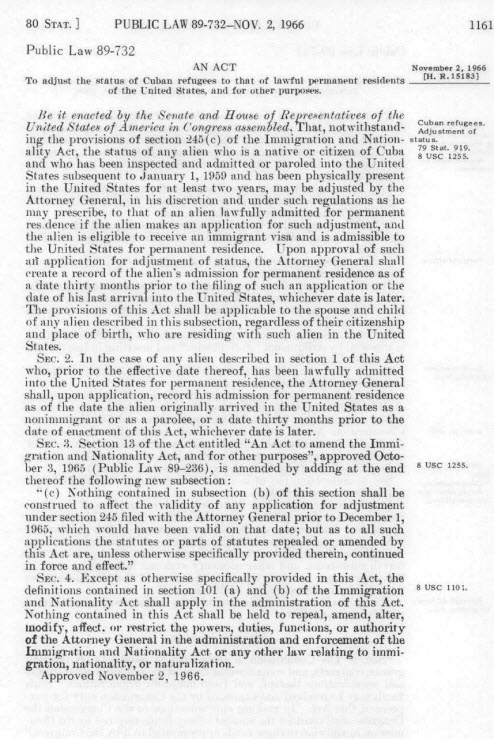 Vice-president Gerald R. Ford had approved the decision to investigate President Nixon. This investigation would determine whether or not the president should be impeached. Nixon was believed to have participated in the Watergate Scandal, along with at least a handful of other governmental leaders.

The economy continued to be a major concern with unemployment at 7.4 percent and the jobs being created being lower paid in the service industry and not the traditional manufacturing jobs

1982 : Following an accident between a fuel truck and a truck carrying explosives midway in the Salang Tunnel in Afghanistan, a firestorm starts enveloping a number of busses carrying Russian Soldiers and kills an estimated 3,000 people, mostly Soviet soldiers traveling to Kabul.

The deadline for the removal of Cuban, Soviet, and Libyan diplomats from Grenada was scheduled for this date. One major problem regarding this plan, however, was that a Havana official announced that Cuban delegation members would stay until Cuban prisoners of war captured by the U.S. were set free. The United States had invaded the island of Grenada about two weeks prior to this time. This attempt was made in order to put an end to a pro-Cuban Marxist regime that had seized this island.

1986 : The American David Jacobsen is held hostage in Beirut by Muslim fundamentalists who are members of Islamic Jihad of has been released after 17 months of captivity

The general election in Israel has returned a hung parliament, with just one seat separating the main right and left wing parties in the Knesset.

1990 : President George Bush rallied in Ohio for the removal of Saddam Hussein from Kuwait without a single shot being fired. He also promised the return of troops very soon.

Tutsi Rebels and Rwandan forces attacked Goma in Zaire hoping to gain control of the airport. This is in response to Hutu extremists who earlier had slaughtered 50,000 Tutsus and then fled to Zaire when the Tutsis took control of the country .

One American astronaut and two Russian cosmonauts became the first to move into the international space station, preparing for a four-month stay.

A U.S. helicopter was shot down while heading home with a few dozen troop members. A total of 16 persons were killed and 20 more were wounded as a result of this incident.

President Bush has said he wants Donald Rumsfeld to stay in his job as Defense Secretary until the end of his presidency. There have been rumours that Rumsfeld would leave after the mid-term elections and some Republicans have suggested he should go. Politicians are distancing themselves from Rumsfeld over the way the war in Iraq has been handled.

Vietnamese prosecutors have said they intend to charge three US citizens, and four others, with terrorism, accusing them of trying to overthrow the government. The US embassy in Hanoi has confirmed that the three US citizens are Nguyen Thuong Cuc, alias Cuc Foshee, Huynh Bich Lien, alias Linda Linh and Le Van Binh.

The United Nations-Secretary General Ban Ki-Moon arrives in Afghan capital of Kabul. His visit their takes place in the wake of the previous week's Taliban attack on a UN guesthouse that left more than a dozen people dead, and coincides with an electoral crisis. During his stay in Kabul, he will be holding talks with President Karzai and the UN officials that are stationed there.

Mexico's attorney general meets his American counterpart in Washington. The US had just announced a record number of extraditions from Mexico. Arturo Chavez and Eric Holder are expected to discuss further cooperation in the extradition of suspected criminals to the US. Eleven fugitives were transferred over the Mexican border on the 1st of November, which makes a total of 100 being extradited this year.

Wikileaks' Julian Assange who is accused of rape and molestation of two women in Sweden lost his appeal against extradition from the United Kingdom to Sweden. Assange's lawyers stated that they would try to appeal to the Supreme Court on the matter.

Two Chinese spacecraft have joined together while in orbit, marking a first for the country. The Shenzhou 8 spacecraft joined with the Tiangong-1 space lab. This event is critical to China's plans for a space station in the future.

Pakistani Taliban leader Hakimullah Mehsud was killed in a drone strike according to a high-ranking member of the Taliban. Mehsud and four others were killed in North Waziristan after a drone targeted his vehicle and sent four missiles.

Born This Day In History November 2

Known For : Playing Ross Geller on the American sitcom Friends ( NBC ) which aired from 1994 to 2004 winning 8 Emmy Awards, and consistently ranked in the top 10 Nielsen Rankings with the final show bringing in 52.5 million viewers. The Ross Geller character is employed as a paleontologist at the New York Museum of Prehistoric History.

Known For : Best known as Emerson from Emerson, Lake & Palmer which he formed in 1970 together with Greg Lake, and Carl Palmer. Emerson, Lake & Palmer are an English progressive rock super group who had worldwide success with albums and toured around the world headlining massive sold out concerts from 1970 to 1978.

Known For : James Polk was the 11th President of the United States (1845 to 1849). During his presidency the United States fought the Mexican-American War and annexed Texas and the Oregon Territory. He was also the Speaker of the House of Representatives from 1835 to 1839 and the Governor of Tennessee from 1839 to 1841.

Known For : He was the 29th president of the United States from 1921 to 1923. While initially popular, he and his administration were marred by scandals and corruption and was a mostly ineffectual president. He was thought to be overshadowed by other members of his cabinet like Andrew Mellon as the Secretary of the Treasury and future president Herbert Hoover as the Secretary of Commerce. He died in office of a heart attack and was succeeded by Calvin Coolidge.