1943 : Plans are in place to combat an invasion by Germany of England later this year as they are thought to favor invading England which would complete the conquest of Western Europe rather than continuing into Russia. ( History tells us that the decision in the end was to march into Russia and many historians wonder if the war would have been very different if they had gone for England )

1920 : Sinn Feinn staged a protest in Belfast a number of windows were smashed during the protest of local protestant churches.

1926 : A General Strike is called by the General Council of the Trades Union Congress (TUC) in an attempt to force the government to act to prevent wage reduction and worsening conditions for coal miners. The strike lasted 9 days with about 1.5 - 1.75 million taking part and included workers from key industries, such as railwaymen, transport workers, printers, dockers and ironworkers and steelworkers, the strike did not achieve it's objective in fact many miners did not get their jobs back and those that were employed were forced to accept longer hours and lower wages. 1926

1930 : Preparations are being made for the first flight across the South Atlantic From Germany to Brazil of the Graf Zeppelin Airship later this month via Spain, and it is hoped this will then be a long term flight destination.

From our 1921 Ladies Fashions


One of the most attractive House Dresses we have seen this season. Well adaptable for street or house wear. Has pique faced collar, cuffs, and pockets. The pique front is trimmed with an elaborate display or pearl buttons to match those on pockets. Popular one-piece style, easy to launder. Choose from blue check, black check, or pink check.

1939 : "Beer Barrel Polka" was recorded by The Andrews Sisters. The song, also known as "Roll Out the Barrel" became a popular standard during World War II and became a favorite of music lovers around the world. More about the year 1939

1944 : Meat Rationing ends for all meats, except for beef steaks and beef roasts.

1946 : The International Military Tribunals for the Far East starts conducting trials for those military and government officials accused of committing war crimes and crimes against humanity during World War II. At the end of the trial seven are sentenced to death including General Hideki Tojo ( Japanese premier during the war) Iwane Matsui ( who organized the Rape of Nanking ) , and Heitaro Kimura ( Who brutalized Allied prisoners of war ) sixteen others are sentenced to life imprisonment.

1948 : The U.S. Supreme Court ruled that covenants prohibiting the sale of real estate to blacks and other minorities were legally unenforceable.

1950 : The United Auto Workers Union called off their 100 day strike against Chrysler Corporation sending 144,000 back to work.

1951 : The Festival of Britain is opened at the Royal Festival Hall by King George VI. The festival marks the centenary of the Great Exhibition of 1851.

Born This Day In History 3rd May

Known For : James Brown nickname including "Godfather of Soul", an American singer, songwriter, dancer, musician, record producer and bandleader , inducted into the Rock and Roll Hall of Fame at its inaugural induction in New York on January 23, 1986,

Born This Day In History 3rd May

Known For : Very popular on radio and film, he was a singer, actor and songwriter. He studied law in Spokane before launching his media career. His singing led to his first film, which was King of Jazz in 1931. He became better known for his C.B.S. radio show, after which he received more film roles and had his songs published. White Christmas and Silent Night were huge hits. He won Oscar in 1944's Going My Way, and made seven Road movies with Bob Hope and Dorothy Lamour. White Christmas was produced as a movie in 1954. He is said to have sold over four hundred million copies of his songs.

1962 : Two commuter trains and a freight train collide near Tokyo, Japan, killing more than 160 people and injuring over 350.

1968 : The first heart transplant in Britain is successfully carried out by a team of 18 doctors and nurses at the National Heart Hospital in Marylebone, London.

1971 : More than 6000 anti war demonstrators were arrested in Washington D.C. when they tried to disrupt commuter traffic.

1986 : A bomb explodes on an Air Lanka Tristar at Colombo airport in Sri Lanka. Tamil guerrillas who are fighting for a separate homeland are blamed for the bomb attack.

Part of our Collection of Accessories From 1921 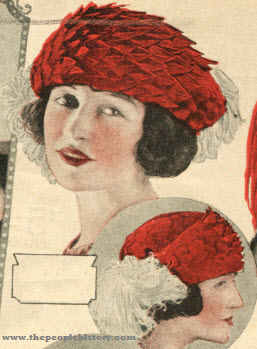 
An exceptional opportunity. Handmade with good quality feathers, securely placed, and trimmed across back with fluffy ostrich. Turbans with broad side lines are becoming to most any type. Finished with silk lining. Choose from bright red with pearl gray, dark brown with tangerine, solid periwinkle, or solid black.

1990 : The Soviet republic of Latvia's new parliament has declared they will press for independence from Moscow following neighbors Lithuania passing a unilateral declaration of independence earlier in the year. In 1991 Uzbekistan, Tajikstan, Kyrgyzstan, Axerbaijan, Ukraine, Moldova, Lithuania, Latvia, Belarus and Estonia all gain independence from the Soviet Union.

2000 : The London Stock Exchange and Germany's Deutsche Boerse confirm they are to merge, creating the world's second largest stock market. Four months later following problems with the merger it is cancelled.

2000 : Abu Sayyaf guerrillas kidnap 21 hostages from the holiday resort of Sipadan, the terrorist group are demanding $2.4 million for the release of the hostages which include at least 10 foreigners.

2001 : The United States lost its seat on the U.N. Human Rights Commission for the first time since the commission was formed in 1947 when the countries of France, Sweden and Austria are chosen for the three seats allocated to Western countries on the 53-member commission.

2006 : Ramin Jahanbegloo, the Canadian-Iranian author, was arrested by authorities in Tehran, Iran. A well-known professor and journalist, Jahanbegloo was taken into custody at the airport in Tehran and had his home searched. The arrest sparked concerns about human rights and freedom of speech in the country.

2008 : A tropical cyclone has devastated parts of the Irrawaddy region of Burma / Myanmar with three out of four buildings reportedly blown down in many areas of the country. Burma has declared Irrawaddy and four other regions, including the main city Rangoon, to be disaster areas. The world's richer nations have all offered aid to the region but the current military backed leaders of Burma are still hesitant to allow foreign aid workers in to the country to distribute the much needed aid. After 3 weeks more than 75,000 have been identified as dead with still a further 50,000 missing which could well take the death toll to over 100,000 making it one of the worst natural disasters in modern times.

2009 : Veronica Lario, the wife of the Italian Prime minister Silvio Berlusconi, announced that she would divorce her husband. The news of the divorce came after Berlusconi was caught up in multiple scandals involving other women and some minors.

2010 : Oscar-nominated British actress Lynn Redgrave died of breast cancer at the age of sixty-seven. She was with her family in Connecticut at the time of her death. She was known for being in such films as Georgy Girl and Gods and Monsters.

2011 : Two Somali pirates convicted of hijacking a boat in 2009 were sentenced to four hundred and thirty-nine years each of prison time. The two men had held a tuna fishing boat hostage, detaining thirty-six crew members for nearly fifty days. Despite the lengthy sentence that was handed down, the hijackers will only have to serve a maximum of thirty years in prison due to Spanish laws.

2012 : German airline Lufthansa announced that they would cut 3,500 jobs in order to reduce costs and save money. The cuts would be made over the next few years and focus on full-time administrative departments. The company stated that higher fees and taxes were the main reason for the cuts.

2013 : Chaudhry Zulfiqar Ali, a prosecutor in the murder case of Pakistan's former leader Benazir Bhutto, was ambushed by gunmen while on his way to a court hearing related to the case. He was shot and eventually died of his wounds. Zulfiqar was also a top prosecutor in a case related to the 2008 Mumbai bombings.

Check out our Updated Quiz Section