1923 : Both Great Britain and the United States are demanding back the loans made to France borrowed during the First World War but the french answer is both Britain and America are much richer nations and as the war was a world war they should not have to pay the money back, negotiations are continuing at diplomatic levels.

1933 : The aviator, Roger Williams, announces his plans to fly a round-trip flight across the Atlantic ocean. His flight plans start from New York and include stops in Rome, Greece, and Ireland. He plans to end in Chicago. It was set to start his flight on July 24th in a Bellanca plane.

1938 Superman Appears For The First Time

1967 : One of the most iconic LP's from the 1960s Music is released by The Beatles. Sgt. Pepper's Lonely Hearts Club Band sold over 8 million copies worldwide.

1935 : Compulsory Driving Test is introduced for all drivers in England who started driving on or after April 1st 1934, A voluntary test was introduced by the Road Traffic Act in 1934 and the first person in Britain to take the test and pass his driving test is Mr R.E.L.BEERE. The test took place on the 16th March 1935. The son of Mr R.E.L.BEERE. still has the certificate 00001 signed in behalf of the (then) Minister of Transport. All drivers buying a temporary driving license must now put ‘L’ plates on the car and take a driving test to get their full license.

Part of our Fashion Collection From 1956 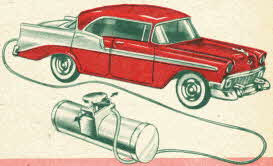 
A 1956 Chevy Hardtop. Like Tru-Miniatures above but this baby has an electric motor that runs by remote control. Second motor gives you power steering. Turns car sharp or easy, right or left. You steer it with miniature steering wheel on control box. Motors are battery powered.

1942 : A Warsaw underground newspaper, the Liberty Brigade, is the first public newspaper to tell the world about the Nazi extermination camps in Poland where tens of thousands of Jews were murdered in Chelmno.

1944 : The British Broadcasting Corp. aired the coded message from the first line of a poem by Paul Verlaine to underground resistance fighters in France to inform the French resistance that the D-Day invasion was imminent.

1946 : The British Broadcasting Corporation/BBC introduces the first TV Licence costing £2 for the British Public. This was in addition to a Radio Licence which cost about 10 shillings (50p). Current TV licence fee is £147.00.

1947 : A tornado kills an estimated 30 people and leaves over 500 people homeless in Arkansas. Many rural communities were hit by the tornado and destroyed. The storm's path was an estimated 20 miles long, and could have been up to 10 miles wide.

Known For : A native Westphalian, Heidi Klum started her fashion career by submitting photographs to the German magazine Petra. She took part in a number of European photo shoots before moving to the United States and becoming Victoria's Secret's feature model. In 1998 she made the cover of Sports Illustrated's Swimsuit Issue, and the exposure she had from this led to appearances on television and parts in movies. She was married to the singer Seal from 2005 to 2014.

1958 : Following a long political crisis over the revolt in Algeria, Charles de Gaulle is called out of retirement to head a new emergency government as a virtual dictator for a 6 month period to bring the country back together.

1965 : In one of the worst mining disasters in modern times an explosion kills 236 workers at the Yamano coal mine near Fukuoka, Japan.

1970 : The former leader of the Soviet Union, Nikita Khruschev , was hospitalized with a burst blood vessel. Although the condition was not life threateningly dangerous, the former Premier was sent to the Kremlin hospital where he was to be kept indoors for a few weeks. 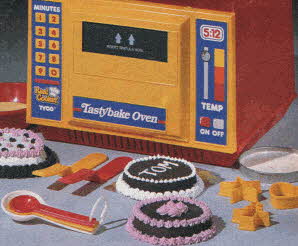 
It's as much fun to bake as it is to eat the goodies you'll make with the Tastybake oven. You can bake cookies, muffins, cakes and even melt chocolate for yummy candies. Door is released by special spatula designed to keep child's fingers out, and a cooking guide is printed on the front panel. Includes metal cake/pie pan, cookie sheet, spatula, recipe book, and three cookie cutters.

1985 : 500 Hippy travelers clash with police on their way to the ancient stone circle of Stonehenge in Wiltshire for an illegal festival, the police set up a roadblock seven miles from Stonehenge. The day is known as "The Battle of the Beanfield" and was the first major test of an English Heritage ban on midsummer festivals at Stonehenge.

1985 : The United States and the Soviet Union faced a stalemate when discussing arms control . Neither side seemed willing to compromise but both sides opened up the possibility for discussion.

2001 : The king, queen and seven other members of the royal family in Nepal are shot dead after the heir to the throne Crown Prince Dipendra went on a rampage with a gun before turning it on himself.


Country bar and matching barstools. Bar is walnut laminate over wood products and has thickly padded elbow rests covered in brown vinyl. Storage shelves in back keep your glassware out of sight. Brown vinyl-covered stool has brown painted base and chrome-plated foot ring.

2005 : The police in Zimbabwe continue the crackdown on shantytowns that have been built in the capital, Harare, destroying thousands of shanty's and arresting more than 22,000 people. The police are destroying these Shanty Towns in an attempt to clean up crime in the cities and forcing the people back to the rural areas of the country.

2005 : Sweden shut down the Barseback 2 nuclear reactor as it continued to phase out using nuclear energy. The country had voted to end its nuclear energy program in 1980 and had been working on phasing out the reactors for twenty five years. However concerns over alternative energy options had some Swedes reconsidering nuclear energy, as well as replacing nuclear energy with more renewable sources like wind and solar power.

2007 : Doctor Jack Kervorkian was released from prison in the state of Michigan after serving eight years. Kervorkian had been convicted of murder for helping terminally ill patients die and became known as Doctor Death. Kervorkian, a proponent of euthanasia vowed he would continue to fight for the right of assisted suicide but would do so by legal means.

2010 : Entertainment Weekly announced that Homer Simpson was to be named the best television and film character of the past twenty years. The cartoon character was best known for his love of eating and oafish antics. The Simpsons character beat out Harry Potter and Buffy the Vampire Slayer, who came in as second and third on the magazine's list.

2012 : After the jury could not decide on five of the six charges former Presidential candidate John Edwards faced, the judge declared it a mistrial. The jury only found him not guilty of one of the six charges he faced for misuse of campaign funds. The former candidate was accused of using donor funds to cover up his mistress's pregnancy during his 2008 presidential run.

Known For : Marilyn Monroe, born as Norma Jeane Mortenson, was a famous starlet known for playing a blonde bombshell. She began her career as a pin-up model during the 1940s and 1950s. By the early 1950s she had become one of the most popular and marketable actresses in Hollywood, appearing in such films as Monkey Business, Gentlemen Prefer Blondes, The Seven Year Itch, and Some Like It Hot. In the mid-1950s she began her own production company. Monroe had a troubled personal life and her marriages to baseball player Joe DiMaggio and playwright Arthur Miller were of great interest to the public. She died tragically of a drug overdose in 1962 at the age of 36.

The first SAT college admissions test is given to high school students.

More Information for the SAT.

2. The test was created by psychologist Carl Brigham after he adapted the Army Alpha test to feature more difficult questions.

3. The original Army Alpha test had been created in the early 1900s by Robert Yerkes and was the first mass intelligence test.

4. After the SAT's initial success in the 1920s it would soon become one of the go-to examinations required for acceptance into college and in the 1930s Harvard began using the test to assess scholarship candidates.

5. More and more universities would begin to require SAT scores for admission as they believed the test to be a more fair standard to assess intelligence regardless of the quality of a student's background education and it could consistently predict academic success for students who received higher scores on the test.