1936: The Cunard ocean liner The Queen Mary is nearing completion on Clydebank in Scotland, and will begin sea trials within 10 weeks, she is scheduled for the Transatlantic trips between Southampton and New York and many details are appearing which confirm she will a success before she even starts her transatlantic sailings with the first passage on May 27th oversubscribed by 4 times already, she will be capable of 32 knots which is faster than any other passenger vehicle afloat and will be the biggest passenger ship afloat with a crew of 1200 and carrying 2200 passengers. Due to the government providing a loan of 10 million for 2 ships it is believed before The Queen Mary even starts her transatlantic runs a second even larger ship will be in production which between them will provide a weekly service across the Atlantic.

The Alex Haley book "Roots" is turned into a TV Mini Series of 8 episodes and the first episode is shown on 23rd and the last episode shown on January 30th. The mini series made history when it won 9 Emmys, a Golden Globe, and a Peabody Award.

The Poll Tax became illegal in all US states it had been a potent prerequisite, and sometimes outright barrier, to voting in national elections, and used as a blunt tool for barring poverty-stricken African-Americans and whites from participating in the electoral process.

A new type of horn was created and patented on this day. This horn is called the "exhaust horn" which is a tail pipe shaped like a pipe organ that plays musical notes. This particular exhaust pipe was created by the Aermore Manufacturing Company.

The first injection of Insulin ( called isletin originally ) on Leonard Thompson, a 14-year-old diabetic who lay dying at the Toronto General Hospital on January 11th 1922 caused a severe allergic reaction. For the next 12 days the biochemist James Collip worked to improve and purify the ox-pancreas extract and on the second injection bought the boy out of his coma and was a complete success.

More about History of Insulin

Four boxers were given an ultimatum on this day. They were urged to fight a suitable contender within 60 days or give up their titles. They were all given championship status in their fighting categories (heavy, middle, and light weight).

1933 20th Amendment To The Constitution

1933: The 20th Amendment to the US Constitution Is Ratified which establishes the beginning and ending of the terms of the elected federal officials.

Franklin D. Roosevelt was a baseball fan most of his life (among other things). Therefore, he wrote a letter with enthusiasm to the Baseball Writer's Association, which was to be read at a dinner sponsored by this organization.

The letter that Roosevelt had sent was addressed to James Dawson. The purpose of it was to compliment the sports' writers who had worked hard at that time to stir sportsmanship and enthusiasm in America. Find Out More on our History of Baseball Page.

In fact, Baseball was considered one of the forms of escape after the bout of the Great Depression. This was one sport that could be enjoyed despite economic woes.

Known For : Chesley Sullenberger is best known for an emergency ditching of US Airways Flight 1549 after hitting a large flock of birds, disabling both engines in the Hudson River in January 2009 and saving the lives of all 155 people on the aircraft. What made him a hero was his calm during the crisis working together with his co-pilot to make a well informed decision ensuring the safety of all on board.

1943 Louis Jordan and His Timpany Five

Louis Jordan and His Timpany Five take the song "What's the Use of Getting Sober (When You Gonna Get Drunk Again)" to the top chart spot. It only stays there for one week.

An express train travelling from York to Bristol derails and overturns at Sutton Coldfield station killing 14 and injuring many more.

1961 : Luxury Portuguese cruise liner Santa Maria is hijacked by a terrorists leftist rebel group who had boarded in Venezuela and Curacao led by Henrique Galvão. The terrorists took control of the ship after killing 1 crew member and injuring others. When they had control they cut off all communication to the outside world. They then sailed the ship to Brazil and 11 days after hijacking the ship agreed to release the ship, passengers and crew in exchange for political asylum in Brazil.

1964 24th Amendment To The Constitution

The 24th Amendment to the Constitution of the United States is Ratified which removed the right to vote in federal elections on payment of a poll tax or other types of tax.

The U.S. ship Pueblo is seized by North Korean naval vessels and charged with spying and violating North Korean territorial waters, the ship is a US intelligence gathering ship

The proposal to create a local community college system with in the Midwest City and Tulsa area was approved. This approval was made by the State Regents for Higher Education organization. However plans would be put on hold until communities are allowed to issue bonds for the establishment of these schools.

A small organization called the National Science Foundation has given East Central State College a substantial amount of money for technological improvements. Most of the $9,745 given to finance the broadened use of a machine called the Technician Auto Analyzer.

The Technician Auto Analyzer was to be used (and has already been used) to assist students studying in the medical field as well as students taking classes in water chemical analysis.

1973: US president, Richard Nixon, appears on national television to announce "peace with honour" in Vietnam.

Sweden becomes the first nation in the world to ban aerosol sprays using Chlorofluorocarbons (CFCs) as the propellant, believed to be damaging to earth's ozone layer

Hundreds feared dead after a 6.0 earthquake on the richter scaqle strikes the Soviet Central Asian republic of Tajikistan.

1993: Thomas Gorsey, a highly influential gospel singer, had passed away on this day. He was the son of a Baptist minister and minister's wife.

He had achieved quite a bit of recognition in his lifetime. For one, he was considered to be the "Father of Gospel Music". He had written over a thousand gospel songs in his lifetime.

Madeline Albright, America's first female Secretary of State was sworn in on this day. Al Gore had done the honors of officiating her first day of service in one of the highest positions of authority given in the U.S.

Madeline Albright was originally from Czechoslovakia. However, she and her family fled from the communist power that ruled that nation and came to America in 1948. She then studied law at Columbia University and where she received her P.h.D.

Before she became Secretary of State, she was given the title of permanent representative to the United Nations. She had received this title by President Bill Clinton.

Childrens Toys From The 1980's

Kids Toys From the 80s
The popular toys at of the decade also signaled the age of the video game in arcades, Games Machines and PC's the most popular games being Space Invaders and Pac Man plus talking dolls were all the rage and at the end of the decade Featured Below Children's very own Sony Walkmans, Talking Alf, Star War Figures, Pound Puppies, My Little Pony and Mr and Mr's Potato Head From Our

Check out our Updated Quiz Section

12. Which Pope became the first to visit the United States in 1965?

14. In 1966, the actor Ronald Reagan began his involvement with US politics when he became the governor of what state?

Five protesters set themselves on fire by pouring gasoline on themselves and setting light to themselves in Tiananmen Square recorded by CNN camera men ( Tapes are confiscated ) and Police with fire-extinguishers quickly put out the flames. The chinese media used the protesters as examples to discredit the practice of Falun Gong which is frowned on by the Chinese government. Falun Gong has denied any involvement in the incident.

Joe Biden is been holding talks in Iraq to defuse a political crisis over candidates for March's general elections. More than five hundred of them have been banned so far, with many on suspicion of loyalty to the dissolved Baath Party. The dispute has been causing bitter recriminations between Iraqi politicians. Many Sunnis are upset, and are saying that their community is being marginalised, while many Shi'tes oppose the rehabilitated Baathists and any U.S. interference. Biden met the U.N. Secretary General's representative for Iraq for a working breakfast, before holding talks with the Prime Minister, Nouri Maliki.

2011 A magnitude 3.5 earthquake hit the Scotland's Western town of Glenuig. The earthquake was felt up to seventy miles away from the center, but did very little damage to the surrounding area

2012 : Felicity Aston became the first woman to complete a solo crossing of Antarctica after skiing for 1,084 miles over 59 days. The thirty-three year old celebrated the accomplishment by herself as the weather did not permit a plane to safely collect her from the Hercules Inlet right away.

Head of the Roman Catholic Church in Poland for over twenty years, Cardinal Jozef Glemp died at the age of eighty-three. Glemp had overseen many crucial moments in the country while heading the church but had resigned in 2004 after being diagnosed with lung cancer.

2014 : Morocco's parliament unanimously voted to change a controversial law that had spurred protests. The law had allowed rapists of underage girls the ability to avoid punishment by marrying the victims. While activists welcome the changes, they say that more needs to be done to protect women.

Part of our Collection of Toys 1950 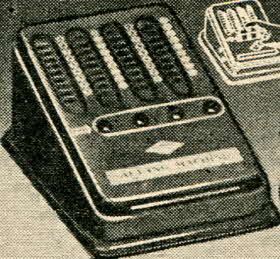