2003 : Space Shuttle Columbia was launched on its final mission featuring more than 80 experiments from around the world. Just a short time later Columbia exploded on re-entry killing all on board.

1953 : For the first time, the Corvette is brought to New York. The first corvette was presented at a car show that took place at the Waldorf-Astoria Hotel. The body of these sports cars were made from fiberglass, giving this car a unique look.

1991 : After midnight of this date, war was to be declared in the Persian Gulf if Iraq did not pull out of Kuwait. Since Iraq did not pull out voluntarily, the Pentagon had begun acting on its preparations to begin an offensive attack on the Iraqi army. By evening of this day, Operation Desert Storm had begun. The United States had begun the attack on Iraq on Kuwait's behalf. Operation Desert Storm was led by Norman Schwarzkopf and 32 nations total were involved-including Britain, France, Egypt, Saudi Arabia, and of course, Kuwait.

A food shortage has caused the death of approximately 968 of every 1,000 babies that are born in the city of Vienna in the previous year (1919). Fortunately, help was sent to this area and the amount of babies dying had decreased by June of 1920.

The United States took two steps towards the defense of the Panama Canal and Central America on this day. One of the actions that the United States took to help the Panama and Central America area was that of lending them $20,000,000. The purpose of the money loaned to Central America/Panama was to help speed up the process of the Pan-American Highway that had been started. This highway is the piece of land that leads to the Canal. The second action taken by the United States was also financial. The U.S. had lent $500,000 to Costa Rica to help that country build an army of its own. Costa Rica was the first country to declare war on Japan after the attack of Pearl Harbor

"See See Rider" hits #1 on Billboard's "Harlem Hit Parade" – the chart that would become the Billboard R&B chart. Wee Bea Booze is the jazz singer that made it #1 and many experts consider this version to be the definitive version of the song. 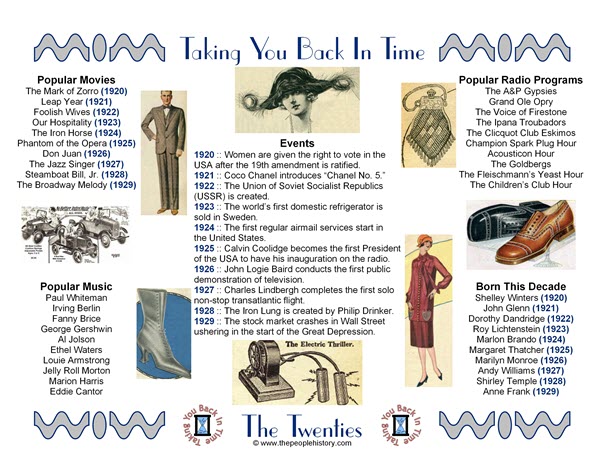 An agreement on this date was made to start peace talks. These were to take place in Paris, and representatives of countries such as Vietnam (both North and South Vietnam), the United States, and the National Liberation Front (NLF-an organization that advocated the freedom of South Vietnam). The representatives from these countries alone with the NLF sat in a special arrangement during this long-awaited peace negotiation meeting. The agreement is that representatives of these countries and the NLF would sit at a round table without name plates, flags, or any other identifiable markings. The original intention of the round table theory was that it would hopefully foster togetherness. However, there was even a long discussion about how the tables should be arranged. The resolution of that was to place a round table in between two square tables. One would not think the position of tables would matter. However, in a case as extreme as a war-peace talk it can make quite a bit of difference-especially in an extremely tense situation such as this.

Chauncey Browning, Jr. returned as Attorney General, and was sworn in by Judge Thornton Berry. Browning had followed in his late father's footsteps-who was also Attorney General at one time. Edgar F. Heiskell III was sworn in as secretary of state on this day as well. He had followed John D. Rockefella. Inauguration was not only meaningful for those voting and running for office, but it was also profitable for businesses. Businesses experienced higher-than-normal sales for after the first of the year than in other years.

The Shah of Iran Mohammad Reza Shah Pahlavi, the leader of Iran since 1941, is forced to flee the country when his army mutiny and violent demonstrations in the streets against his rule .

Bernadette McAliskey formerly known as Bernadette Devlin, was shot by gunmen who burst into her home at Coalisland in County Tyrone. The injuries are serious, but not life-threatening

1995 : Avalanches following heavy rain sweep two buses off the highway between Srinagar and Jammu in Kashmir. Two more days of avalanches in the area eventually killed more than 200 people; 5,000 others had to be rescued.

The fuel supply tanker 'Jessica' has run aground on the Island of San Cristobal in the Galapagos Islands, marine biologists are warning of an ecological disaster to the Archipelago. ( the ship did leak 180,000 gallons of oil which caused an ecological disaster with up to 62% of the marine iguana population on one island killed off.

The number of victims dying from the H5N1 strain of Bird Flu has increased this week with deaths reported in Indonesia and Turkey. The number of reported cases is increasing and many more countries are now affected spreading to Africa and Europe. Around the world where cases are reported governments are culling millions of chickens hoping to contain the spread of the disease.

Known For : Kate Moss is an English super model who began her carreer in modeling ar 14 years old and who reportadly earnt in excess of 9 million in one year for modeling and advertising because of her fashion icon status, she is also known for her party lifestyle and high profile relationships including Johnny Depp.

Known For : Aaliyah is most well know for being a famous pop and R&B singer, actress, and model in the 1990s. Some of her most recognized songs are "Try Again" and "One in a Million" and she appeared in movies such as Romeo Must Die and Queen of the Damned. Aaliyah died in August of 2001 in a plane crash leaving the Bahamas.

Known For : Dian Fossey was an American zoologist who dedicated a large portion of her life to the study of gorilla groups in the mountain forests of Rwanda, over a period of 18 years. She was brutally murdered in the bedroom of her cabin, many suspect poachers to be the murderers but no one was ever found guilty of the murder and it remains a mystery

Bank Of America the largest in the U.S. will receive $20bn in fresh US government aid and $118bn worth of guarantees against bad assets. This is in addition to the $25bn in capital injections from the Troubled Assets Relief Programme, known as Tarp Bank of America has already received.

Jon Huntsman, a candidate for the Republican presidential nomination announced that he was ending his race for the White House after coming in third in the New Hampshire primary. Huntsman ended his campaign by endorsing Mitt Romney as his choice for candidate.

2013 : A suicide attack in northern Iraq killed at least ten people and injured another ninety people outside an office of the Kurdish Democratric Party.

The first session of the Special Tribunal for Lebanon opened this day, nearly nine years after the assassination of Lebanon's former Prime Minister, Rafik Hariri, the main focus of the trial. The trial is the first in in legal history that would feature an international court to try a case based on terrorism charges. It is also the first trial since the Nuremberg trials that would look for prosecutions "in absentia" as all of the suspects have disappeared.