1958 : Production of the luxury Packard automobiles is ended shortly after Packard is merged with Studebaker. The Ohio Automobile Company had begun production of the distinct cars in 1899 in Warren, Ohio. The company name was changed to the Packard Motor Car Company in 1902 following investment from outside. For the next 50 years Packard produced some of the highest quality and highest priced cars in the US, but following some poor designs which dated the models the company got in financial difficulty in the early 50's and never recovered.

1902 : There have been volcanic eruptions affecting Oregon, Washington, and Alaska. The “chain of fire,” which is a series of volcanoes, starts at Tierra del Fuego and extends for 25,000 miles. The Newark Advocate explains, “The burning craters in Alaska, one of which began to work, unites the chain of fire of the new world with the old, including Japan, Korea, Formosa, and the Philippines.”

1929 : One thousand single, young men from California have immigrated to the Portuguese colony of Angola which is in West Africa. Portugal is quickly developing infrastructure there. It has already laid down 17,000 kilometers of railways and 100 kilometers of roads. Those with less than $1,000 don’t pay taxes and farmers are given an allowance for farm implements.

1934 : The German people vote to give Adolph Hitler complete power combining the positions of chancellor and president into the position of the Fuehrer.

1939 : Mr. F.W. Winckley, who was in charge of tobacco development in the British colony of Jamaica, told the English government that it should continue its efforts to expand this industry of “cigar leaf” tobacco. He said that in three years this kind of tobacco had increased five times the original amount. Jamaica earned the British 10,000 pounds a year.

1942 : Allied troops attempt to gain control of the French port of Dieppe in Operation Jubilee, but are forced to retreat after 8 hours of suffering terrible casualties, the toll is believed to be as high as 4,000 dead or injured from the 6,000 who attempted to land on the beaches.

1944 : Liberation of Paris starts following the invasion by allied troops during Operation Overlord.

1944 : The United Nations was considering what restrictions should be placed on Nazi Germany after its surrender. It was a given that allied soldiers would occupy Germany as long as the youth needed to be re-educated in democracy and anti-Nazi thinking. Holland, Denmark, Belgium, and France would keep all Nazi military equipment and guard Germany from waging war again. Also, the goods plundered by the Nazis were to be returned and the Jews compensated for their losses.

1953 : A military coup supported and financed by the United States overthrows the government of Premier Mohammed Mosaddeq and reinstates the Shah of Iran.

1955 : Hurricane Diane hits the Carolinas leaving over 170 people dead in it's wake with massive damage to homes and property in the area affected.

1955 : Protesters in Kenifra, Morocco went on the rampage setting fires and killing in a rampage against Europeans. It was the one year anniversary of the previous sultan’s exile which sparked the outburst of violence. In Casablanca 10 individuals were killed and 20 injured.

1960 : The captured American U2 pilot Gary Powers is sentenced to 10 years imprisonment for espionage by a Soviet military court.

August 19, 1967 : The Soviet Union’s communist newspaper, Pravda, accused China of making unwarranted attacks on the Soviet embassy in Peking and straining relations between Russia and China. Pravda blared, “Literally not a single day passes without a malicious invention about the Soviet Union” (by China). Russia claimed that China was launching an anti-Soviet campaign to keep the focus off of Chinese domestic problems.

1979 : In Zurich, Switzerland track records were being broken by English runner, Sebastian Coe, who overturned legendary track stars like John Walker and Alberto Juantorena. Coe performed to a roaring audience of 22,000 Swiss fans.

1980 : A fire caused by a passenger using a portable butane stove as the plane started to make it's emergency landing it burst into flames killing all passengers and crew.

1987 : Michael Ryan goes on a killing spree in Hungerford, Berkshire armed with an automatic rifle, a pistol and a hand grenade. He kills 14 people including his mother and a local policeman before killing himself inside a nearby school.

1989 : Eight U.S. hostages were being held in Lebanon and the Reagan government was struggling to get them back home. Iran offered to assist the American government to get the prisoners back, but wanted the U.S. to give back some Iranian resources and money.

Born This Day In History August 19

Known For : Bill Clinton was the 42nd US president, serving from 1993 to 2001. He was a popular president who was known for turning one of the largest deficits in US history into a surplus throughout presidency. He faced an impeachment in 1998 and 1999 trial for alleged perjury and obstruction of justice when questioned about an extra-marital affair but was acquitted. Prior to his two-terms as president, he was the Governor of Arkansas.

Known For : Ginger Baker is best known as the drummer for the band Cream with Jack Bruce and Eric Clapton which had significant chart success in the late 60s as a blues-rock band and supergroup selling over 35 million albums worldwide. Although they did not make many studio albums Fresh Cream, Disraeli Gears, Wheels of Fire and their final album Goodbye and four live albums during the time they were touring they were always sold out.

From our 1960s Kids Fashions 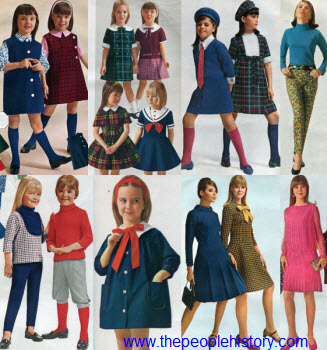 1966 Girls Clothes
Price: $2.39 - $22.50
Description Sailor dresses remain popular in 1966, along with jumpers and bold plaids with bow accents. Drop-waist dresses proved popular for juniors and teens as well as houndstooth and tapered pants with patterns. Knee-high socks and stirrup pants were popular with younger girls.

1991 : Leaders of the Army, the KGB and the Police in the Soviet Union are attempting a coup backed by tanks and troops and have the Soviet President Mikhail Gorbachev under house arrest. The coup failed and shortly after control is back in the hands of the president and the Coup Leaders are arrested.

August 19, 1997 : A massive influx of Cambodian refugees fled into Thailand to escape the bloody conflict between coup leader Hun Sen and Prince Norodom Ranaridh. There was a nocturnal exodus of Cambodian people and livestock who fled the violence.

2003 : In France a 104 degree heat wave killed approximately 5,000 people who perished from dehydration and complications of heat related illnesses. As a result of the calamity morgues were crammed full of corpses and even warehouses with refrigeration were pressed into service to cope with all the dead bodies. In the government, different parties blamed each other for not responding correctly to the crisis and France’s director general of health, Lucien Abenhaim resigned.

2003 : A terrorist bomb attack on The United Nations Baghdad headquarters has left at least 17 dead including UN top envoy Brazilian Sergio Vieira de Mello. In an official statement the United Nations has said the bombing has dealt a blow to its operations in Iraq but will not stop its work in the country.

2005 : A Texas jury found Merck & Co. liable for the death of of Robert Ernst, a 59-year old man who'd taken the once-popular painkiller Vioxx, awarding his widow $253.4 million in damages. This followed Merck & Co voluntary withdrawing Vioxx from the market worldwide on September 30, 2004 following concerns over increased risk of heart attack among rofecoxib ( Vioxx, Ceoxx and Ceeoxx ) users. There have been 1,000's of cases and class actions filed against Merck over the last three years with litigation still continuing.

2006 : A total of 28 prisoners escaped from the Dendermonde jail in Belgium. Six escapees were captured immediately but the others were able to scale the prison walls to get out.

2007 : The country of Jordan relaxed its rules regarding displaced Iraqi families to allow more Iraqi children an education opportunity. Up to 50,000 new Iraqi students could now join the state school systems.

2008 : The Zambian president Levy Mwanawasa died in Paris two months after having a stroke. He had the stroke in June of 2008 during an African Union summit in Egypt and was flown to France for medical care.

2012 : At least six people died and another 100 people became sick after eating contaminated pickles in Japan. The government was blaming locally produced pickled Chinese cabbage that they believe was contaminated with E. Coli. Most of the people effected were elderly but one of the dead included a four year old girl.

5. In 1953 the film Gentlemen Prefer Blondes starred which iconic actress?

9. In what year did Alfred Hitchcock's film "Psycho" first debut?

18. Which of these movies was not released in 1957: 12 Angry Men, The Bridge on the River Kwai, North by Northwest, or The Three Faces of Eve?

19. In 1995, the first ever completely computer generated film debuted, what was it?