Music Styles, Bands And Artists during the 1980's

Music in the 1980s was all about image and with the advent and popularity of MTV, the images that accompanied artists became more important than ever. When it came to music during the decade, nothing was understated, not the sound, not the fashion, not even the charity. The 1980s reflected the beginning of a period of great income disparity and a focus on affluence was reflected in the music. There were also several new genres that popped up including, Hip Hop, New Wave and Hair Metal, all of which have influenced music today.

Arguably the most important event to influence music during the 1980s was the creation of the cable network MTV (Music Television). MTV was the first network to exclusively showcase music videos, making its debut on August 1st, 1981. The first music video to be played on the channel was, appropriately, the Buggles' "Video Killed the Radio Star," as music would forever change and the focus would shift from music and lyrics to fashion and theatrics, at least in the world of pop music. The original concept of the network was to play music videos twenty-four hours a day, every day. And, while this has obviously changed since then, the innovative concept created a whole new breed of pop star.

Pop stars and their music changed in the 1980s with the help of MTV and a greater focus on image. A new breed of mega-stars emerged, becoming iconic mascots for the genre and defining the decade through fashion, talent and persona. Some of the superstars to emerge were Madonna, Michael Jackson, Whitney Houston and Prince. They experienced a level of fame and success not seen since Elvis Presley and the Beatles. These stars influenced fashion through their music videos, giving fans a first hand glimpse into emerging trends. Their songs set the gold standard for what pop music should be, and through constant reinvention they were able to navigate the pop culture world and keep themselves relevant. Thirty years on, they are still the standard that today's pop stars get compared to. There are several reasons they these pop mega-stars emerged, the main one being they were genuinely talented artists. Other reasons include a greater public interest in celebrity gossip, fashion and and increased obsession with pop culture. It also was related to the public having an increased disposable income and a want to imitate celebrity affluence. Changes in technology also contributed to the availability of music (MTV), better ways to listen (CDs and cassettes), and portability of music (the Walkman and boom-boxes). Lastly, a lot of these superstars' success can be accounted for through smart marketed by record companies and the artists' ability to look at themselves as brands. 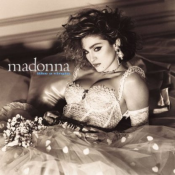 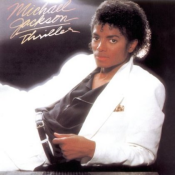 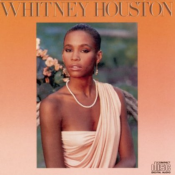 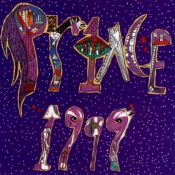 One trend in pop music during the decade was the re-emergence of older musicians who had once been popular as a part of a group or duo into their own solo careers. Some examples include Diana Ross, Cher, Lionel Richie, Tina Turner and Paul McCartney. These artists had already experienced success during the 1960s and 1970s and a few of them had even tried becoming actors during that time. They also came into successful solo careers after adapting to the new musical landscape. Cher, Tina Turner and Diana Ross all updated their looks to keep up with fashion, Lionel Richie made memorable music videos and adapted his soulful sound into the new style of pop music and Paul McCartney collaborated with other successful musicians to keep himself relevant. Part of the reason these artists were successful had to do with the fact that the Baby Boom generation was coming into adulthood and had an influx of disposable income to spend on the records of artists they had grown up listening to. They brought a sense of nostalgia for the good old days of music and yet their songs and styles were updated, combining the best of both worlds.

The eighties was the decade of one hit wonders, where an artist would achieve massive success with one or two extremely popular songs and then seemingly fade away, never able to re-create their success. Part of this had to do with the expansion of the music industry, facilitated by MTV and technology. Record companies could now make just as much money by manufacturing one-hit artists in succession while not having to invest the time and money that would make a mediocre musician into a star with more longevity. Trends were also changing more quickly and many artists could not keep up and adapt fast enough. As the world's society became more globalized, the pool of talent became bigger, making it easier to move onto the next new artist. The changes in technology and societal attitudes also meant that consumers' attention spans got shorter. Some of the most memorable one hit wonders from the decade include, a-ha's "Take On Me," Soft Cell's "Tainted Love," Toni Basil's "Mickey," Nena's "99 Luftballoons," and Dexy's Midnight Runners' "Come On Eileen." 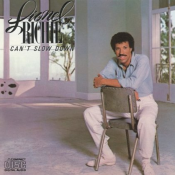 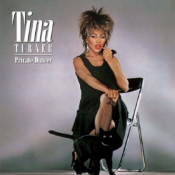 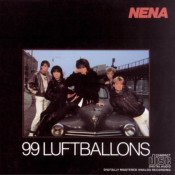 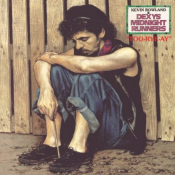 Hip Hop/Rap music originated in African American communities in New York City in the 1970s and became more mainstream and part of popular culture in the mid to late 1980s. Hip hop music originally had a difficult time breaking into the mainstream due to MTV's reluctance to show music videos of black artists. After much criticism, the network started to embrace black musicians like Michael Jackson, whose videos were amongst the most popular, paving the way for hip hop artists like Run DMC and LL Cool J to usher in the era of commercialized rap music. As the genre gained traction on MTV, it gave the white middle class a glimpse into inner city culture and many conservative parents of the time were disapproving of the genre that had been called the "new rock n' roll." Key elements of the genre include sampling old records, rapping lyrics, fun sounds with an underlying message, beat-boxing and electronic sounds. Hip hop music sounded like nothing that had been heard before in mainstream music and the late 1980s was thought of as the Golden Age, were everything seemed original and innovative. By the end of the decade MTV started airing the program "Yo! MTV Raps" making the hip hop and rap music a global phenomenon. Important hip hop acts like Run DMC and LL Cool J made the genre commercial and were style icons, the Beastie Boys made the music "white friendly" and added elements of rock music, and Salt-n-Pepa were female pioneers of the genre. 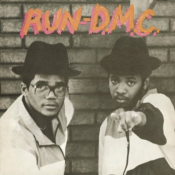 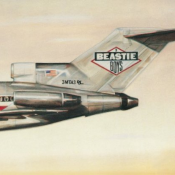 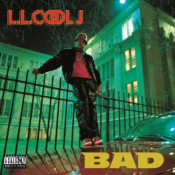 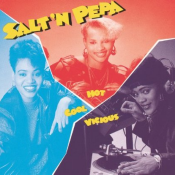 The New Wave genre began in the 1970s and was popular until the mid-1980s. The focus of this music was on artistic themes and the sound was tied to punk rock, dance music, synthesizers and other electronic instruments. New Wave eventually became tied to pop music as music videos from the genre were heavily promoted on MTV. The term "New Wave" is meant as an all encompassing term that allows a variety of highly diverse artists to fit into the same category. Some artists had a futuristic sound while others were closer to punk rock. New Wave bands and artists had an impact on fashion with their unique clothing and hairstyles that the youth culture would adopt. Many of the decades one hit wonders fell into this genre. Some of the definitive New Wave bands were Duran Duran, Blondie, Billy Idol, the Talking Heads, and Culture Club. 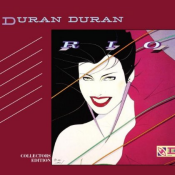 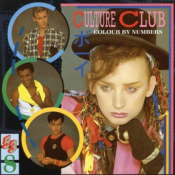 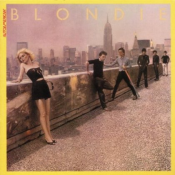 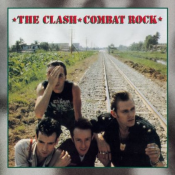 Hair Metal had its roots in the 1970s Glam Rock. Popular bands in the genre often came from the L.A. Sunset Strip music scene and the United Kingdom. Hair metal bands would pull influences from heavy metal, punk rock, and traditional rock music to develop their sound. Lyrically, songs had catchy hooks and a pop sensibility. Songs were often party anthems or power ballads and would focus on themes of being an outlaw, drugs and women. Groups from this genre were called "Hair Bands" because members of these male-dominated bands would often have long and big-styled hair and would wear makeup and spandex clothing, creating an androgynous look. Bands in this genre fell on large spectrum from being almost pop music/soft rock to a heavier and grittier sound and nearly all of them had a flamboyant and outgoing lead singer. Hair metal bands were also associated with a hard-partying lifestyle, groupies and drug-use. Notable hair bands from the decade include Bon Jovi, Van Halen, Aerosmith, Def Leppard, Guns n' Roses, and Poison. 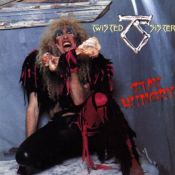 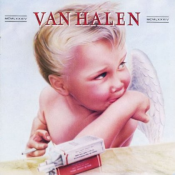 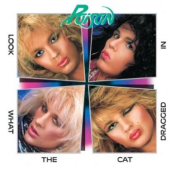 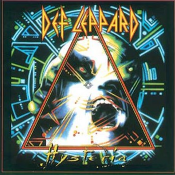 As many pop stars became excessive and affluent during the eighties, they wanted to show that they could be generous and have a serious purpose by taking up causes. The best way for many of them to do so was to create or contribute to charity concerts and recordings. These were bigger and better than ever during the decade and there were plenty of causes from which to choose. Musicians would organize these songs and televised concerts and contribute the profits to the cause. Others would hold the concerts solely to increase public awareness of an issue. Bob Geldof's "Band Aid" super-group recording of "Do They Know It's Christmas?" and subsequent "Live Aid" concert were amongst the most memorable and arguably the largest of these charitable events. Both Band Aid's recording and Live Aid's July 13th, 1985 concert aimed at raising funds for victims of famine in Ethiopia. The group featured mainly British artists which would influence its American equivalent, USA for Africa, created by Michael Jackson and Lionel Richie. USA for Africa recorded the charity song "We Are the World" and their May 25th, 1986 benefit was called "Hands Across America," both aiming to raise money for victims of famine, poverty and homelessness in African countries. Another notable musical charity event during the decade was hosted by Willie Nelson, John Mellencamp and Neil Young. It was held on September 22nd in 1985 and was called Farm Aid. The concert was held to raise money for struggling farmers in the United States. There were various other charitable events formed by musicians in the 1980s and the enduring popularity and seemingly effective outcomes of these events have made them a lasting fixture in public charity.


Popular Songs Each Year in the 80's

Popular songs from the Eighties Decade, arranged by year but in no particular order. Do you remember listening to these songs on the radio? 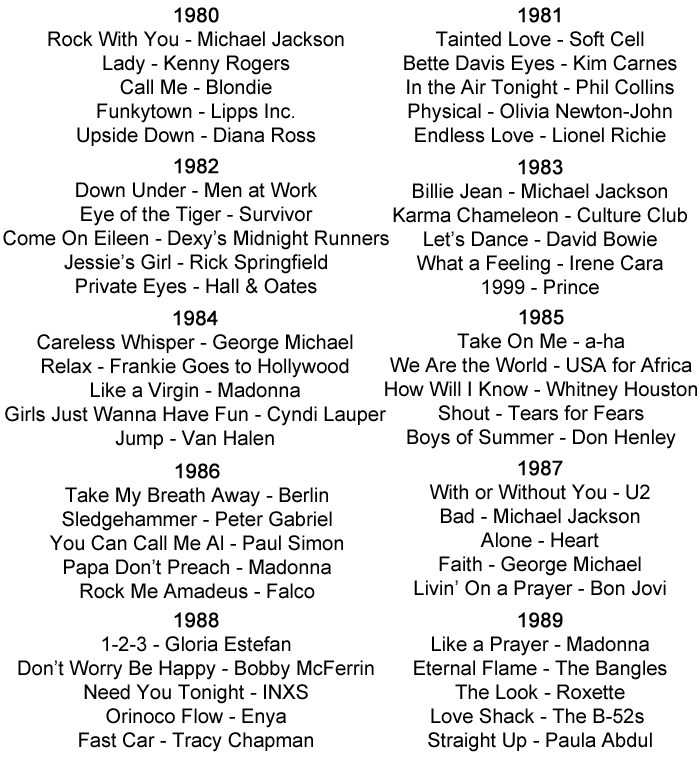 Coward Of The County Kenny Rogers 1980
Imagine John Lennon 1981
Ebony & Ivory Paul McCartney with Stevie Wonder 1982
Come On Eileen Dexy's Midnight Runners 1982
Eye Of The Tiger Survivor 1982
Billie Jean Michael Jackson 1983
Karma Chameleon Culture Club 1983
I Just Called To Say I Love You Stevie Wonder 1984
Do They Know It's Christmas? Band Aid 1984
We Are The World USA For Africa 1985
Dancing In The Street David Bowie & Mick Jagger 1985
Who's That Girl Madonna 1987
Desire U2 1988
One Moment In Time Whitney Houston 1988
A Groovy Kind Of Love Phil Collins 1988