1930s Memories From Our Visitors

Memory Posted By: John B

There were gas lights in the hallways, but converted to electric. The heat was from a old iron stove that burned wood or coal. To take a bath there was a 5 gallon tank of water that was lighted with a match and was heated by gas. We were poor, and to get fuel for the stove my mother sent me out to find things to burn such as old wood boxes or cardboard.

On one occasion I left our block and went down under the elevated train on 3rd ave. I was attacked by a group of kids. I woke up in the back room of a bar. A man was washing the blood from my face. I was left unconcious on the sidewalk.

My mother would also send me out to with 5 cents to buy carrot tops from the vegetable store and to the meat store to ask for a bone for my dog. With the carrot tops and a soup bone she made soup for a family of four.

This is a story my great grandmother Louise told me - and that her daughters affirmed as absolutely true and the funniest thing I have ever heard happen in my life.

During the depression my great-grandmother did these things to support herself and her 4 daughters; Marjorie, Joanne, Jackie & Jill. They made wedding trouseaus and dresses etc., for those who were still wealthy, knitted everything from lace to wool, kept a large garden, and raised geese and ducks for eggs and down which they would stuff into pillows for sale.

At the end of the garden harvest time they would turn the geese and ducks loose to clean up all the little leftovers and eat bugs.

Her neighbor, Harry, supported himself by making 'bathtub gin' in his basement- which involved using a great deal of corn, part of which Louise would provide from the garden. At the end of the booze making process there would be a lot of what they called 'squeezings' - basically alcohol soaked corn mash which Harry would dump into a pit and bury. Well one morning Louise and her daughters got up to find every one of the ducks and geese laying all over the yard and garden- dead. Not knowing what happened - and in a panic - Louise decided that the least they could do is strip the down feathers from the birds to stuff into pillows so as to prevent a total loss.

Putting all 4 girls to work- plus a few volunteer neighbor ladies- they had succeeded in stripping about 30 birds and tossing them into a pile behind the shed - when suddenly a goose walked - rather unsteadily and completely bare- out from behind the shed and proceeded to go up the path toward the house.

Then another - and another followed, all bare and weaving from side to side. The ladies jumped up and ran behind the shed where more of the birds were kicking around and trying to push themselves up onto their feet. Walking out a bit past the shed to round up the birds, Louise found a huge pile of corn mash, unburied and stinking to high heaven - with duck prints all through it. Here the birds were stinking drunk and completely comatose from eating old corn mash. A few had died, but most were alive. So now what to do? Ohio has bad winters and she had about 30 ducks and geese who were basically stripped bare and would never survive the cold. Well they did the only thing they could think of at the time- they went from stripping feathers to knitting wool sweaters for every one of those birds, using all the leftover wool yarn they had. Louise told me that years Christmas goose had the 'most interesting flavor' she had ever experienced.

During the mid-30s my family lived in the hills above the platte River in central Nebraska.

We had a farm of 320 acres, no irrigation. In the spring ,after the the crops were in and before harvest of our crops my father worked on the railroad, Union Pacific, to supplemment our income. Mom and we three children tended the livestock, while dad worked and was away with the car a week at a time. In this period of time known as the dust bowl the wind blewin our area from the North.

On one afternoon Mom gathered the three children together telling us to get a shovel and allthe tubs and buckets together and go with her. We went across the road on the South of our place down into a draw or gulley. Mom had us clear off a spot where the dust had blown the previous months covering the snow. After filling all of the tubs and buckets we hurried back to the house and Mom put the Ice cream mixture into the hand turned freezer, putting the snow and salt in its place,all the while one of us turning the crank. It didn't make very firm ice, I'm sure that we injoyed it.

The time frame had to have been April-June. This was written to tell how the dust blew and settled in places thick enough to isulate the unmeleted snow

The People History has been lucky enough to have had some memories added by those who survived ( noticed I did not say live ) those harsh times.

I have spoken to a number of older gentleman over the last 12 months to try to get an understanding of how hard those times were.

And I was surprised none of them attended a traditional school but were taught by parents. Most had tasks that were important to the families survival as young as 7 years old , they included collecting wood or cardboard boxes for keeping the house warm, and the food they ate was basic putting it mildly often with no meat or vegatables for days on end, and many shared sleeping accommodation with the rest of the family with up to 5 sleeping in the same room.

Often the father was not at home as he would be travelling the country looking for work often 1000's of miles away and getting there by train jumping ( because they had no money to pay for travel ) .

I would ask any and all of you to try to speak to grandparents and greatgrandparents about those times if they are willing please post some of their memories on The People History . But even if they are not please still ask them about those depression years, you will find them interesting and will give you so much more respect for this great generation of people who survived such hard times.

The 30's mostly remembered as the time of the great depression, history will tell you that the reason was caused by The Wall Street Crash, but what history can not tell you is how ordinary people were effected.

In the early thirties there was the depression, so things weren’t very good. People didn’t have as many cars. We didn’t have a car when I was a child until I was ten years old. I lived in Chicago and we came up here (Atlantic Canada) because my mother’s home was in Murray Corner and my father’s people came over from Scotland and settled in Little Shemogue. We didn’t even get a radio until I was ten years old, but my father was a singer and I was taking piano lessons from the time I was six. Did you ever hear of the “Golden Book of Songs”? It was a book that probably came out at that time and it had old songs in it, such as “I Wandered Today In the Hills Maggie”. I had a lot of old Scottish songs that we used to sing. My grandparents had an old organ and we used to sing hymns. The movies were talkies. I remember my mother taking me to “Pygmalion”.

We moved from Chicago to Joliet when I was 10 which would have been ’34. We moved to a house on St. Louis Avenue. Dillinger was a criminal and he was about three or four blocks from where we lived. The movie “Bonnie and Clyde” was a take off of Dillinger. He was a real first class criminal.

In 39’ we were up here for the summer and we started back on the 3rd of September. Something that happened which was very interesting was that whole summer we were The war started and we were in a restaurant that morning for breakfast and we heard that war had been declared. We knew that is was coming. It started the first day of September. That summer the sky in the evening and the night time was all colours of the rainbow – all intermingling, flashing,, coming and going. I never ever have experienced anything like it. This was all the colours in the rainbow. It was almost like it was a signal of something – the war coming. I had cousins and a brother that went to war. He was in the navy.

Comment From Georgia Stabell When I was about 1-10 years old magazines were about 5 cent for the thickest magazine possiblely found.

Amos and Andy Taxi
Price: 95 cents
Description The Amos and Andy Taxi was popular because of the radio comedy series "Amos 'n' Andy" which ran nightly through the 30's, I included this first because it reflects how popular media began to influence what children played with from the early 30's right through to today. 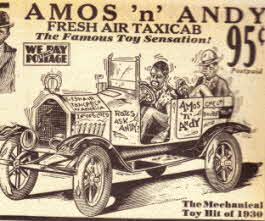 Balsa Wood Kits
Price: From 83 cents
Description These were ideal during the depression years as they provided a cheap fun idea to keep kids amused while allowing them to build something, the kits were fairly easy to assemble and anything to do with planes and flying was new and exiting to children. 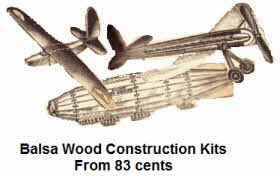 The 30's Hard Growing Up Canada