Important Events From This day in History November 5th

1942 - Egypt -- El Alamein
1942 : The British win the Second Battle of El Alamein with the British Eighth Army headed by ( Monty ) Lieutenant-General Bernard Montgomery when the ( Afrika Korps ) commanded by Field Marshal Rommel ( Desert Fox ) are forced to surrender exhausted and dying from dehydration. In a famous speech a few days later Winston Churchill uses these well known lines "This is not the end, it is not even the beginning of the end. But it is, perhaps, the end of the beginning.".

5 Nov, 1991 - Tenerife - - Robert Maxwell
The body of the millionaire newspaper publisher, Robert Maxwell, has been found in the sea off the coast of Tenerife. After his death it emerged that the Mirror Group's debts vastly outweighed its assets and £440m was missing from the company's pension funds.

1920 U.S.A. - - liquor raid
1920 : Two Oklahoma law enforcement personnel helped uncover the details of a liquor raid. In the process, one gallon of corn juice, one quart of gasoline, and one live prisoner were held. One citizen was taken into custody. 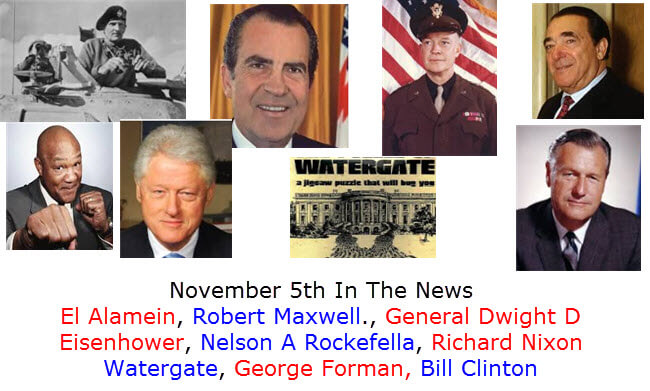 1932 - U.S.A. - - Roosevelt
1932 : As the two presidential candidates Hoover and Roosevelt wind up their tour of the country a Roosevelt landslide is being predicted The Nations 40,000,000 voters will decide on Tuesday who will be the nations next leader in these times of mass unemployment and hardship. The odds are 5 to 1 on Roosevelt winning

1935 - Japan - - Border Patrol Clash
The Japanese government urged the Russians to discuss a border patrol clash. This conflict was exchanged between Soviet and Japanese-Manchoukuoan soldiers. This was actually the second request sent by a Soviet ambassador in regards to this matter. The Japanese foreign minister had responded to one of the request by sending a memo. In this memo, it had indicated that the Japanese government was not involved in the border conflicts. Japan urged the Soviet ambassador to contact the Manchoukuoan government.

1940 - World War II - - Shipping Sunk
Two different ships were destroyed by the Germans in the waters of the North Atlantic Sea. One of the ships was a British passenger ship and the other was a freighter.

1953 - U.S.A. - - Middle East
It was revealed that Israel and Arab states were warned that the United States could not carry the financial burden of the Middle East forever. The cause of this burden was largely because of plans to develop the Jordan River, and to assist 800,000 Israeli refugees. The refugees were displaced as a result of the Palestine War.

1958 - U.S.A. - - Rockefella
Republican Nelson A Rockefella has won in New York unseating Democratic Governor Averell Harriman with more than half a million voted to spare. This was the millionaires first attempt at public office .

1963 - Germany - - Convoy Trapped
The United States Army began delivering supplies to men trapped in a convoy. This convoy was trapped on the day before despite efforts to free it. This 12-vehicle system was still seized by armed Soviet cars at the Marienborn checkpoint heading towards East Germany.

1967 - Great Britain - - Train Crash
1967 : A Commuter express train careered off the tracks at Hither Green coming into London causing the deaths of 53 with many more injured .

1968 - U.S.A. - - Richard Nixon
Richard Nixon wins a close contest to be elected the 37th President of the United States. Nixon received 43.2 percent of the popular vote, while his democratic opponent, Hubert Humphrey, closely followed with 42.6 percent..

1973 - U.S.A. - - Watergate
In the midst of the need for peace in the Middle East, along with the pressing energy crisis, more was at stake in Congress. Another order of business on the agenda pertained to whether or not President Nixon should step down. He was allegedly a part of the Watergate Scandal.

1976 - U.S.A. - - Unemployment
The unemployment jobless rate continues to rise with October figures published today showing an increase from 7.8% to 7.9% in October Jobless Figures.

1978 - Nicaragua - - Sandinista Front
The ruling Sandinista Front who took power during the revolution 5 years ago have won in the first elections in the country. The FSLN led by Daniel Ortega has said he has won with over 70% of the popular vote.

1985 - USSR - - Joseph Stalin
Joseph Stalin's daughter Svetlana Peters was reported as returning to the USSR. She was known as saying that she did not have a day of peace in the United States. Another person had gone back to the Soviet Union telling tales of drugs and bribery.

1990 - Jordan - - American hostages
An account was printed today of the Freedom of four sick American hostages. They had just arrived in Amman, Jordan from Iraq on the day before. The release of the above-mentioned hostages was encouraged by the Fellowship of Reconciliation. This organization is a U.S. peace group.

1996 - Egypt - - Alexandria
1996 : Divers have discovered the ancient port of Alexandria from 2000 years ago which was swallowed by the sea and contains the ruins of Cleopatras Palace and Mark Anthony's home and temple when the Roman warrior was in Egypt. Divers have found thousands of artifacts dating back to 323BC to 30BC and many of the original columns are still standing and in remarkable condition.

1996 - U.S.A. - - Bill Clinton
Bill Clinton wins his second term with a landslide victory and became the first Democrat to win back to back victories in 50 years.

2000 - U.S.A. - - O.J. Simpson
O.J. Simpson, a man charged of killing his wife and daughter tried to sue his former lawyer for breach of contract. However, this could not be proven, so the charge was dismissed by the judge. Simpson had faced legal trouble for a number of years regarding the murders he had allegedly committed.

2005 - England - - Guy Fawkes Night
Guy Fawkes Night celebrating the failed gunpowder plot of 1605 400 years ago when there was an attempt to blow up the British houses of parliament. Since that time, Guy Fawkes day is celebrated by bonfires, fireworks and the burning of effigies called "guys" on the bonfire. ( Guy Fawkes was captured, confessed and was executed )

2006 - Europe - - Power Cuts
2006 : Two high voltage power lines in Germany failed triggering a cascade of cuts as automatic safety devices cut millions of customers in order to prevent a total blackout of the continent. Parts of Germany, Belgium, France (including parts of Paris), Spain, and Italy were affected.

2006 - Nicaraguan presidential election
US-backed President Bolanos has become increasingly isolated since he led the anti-corruption drive against his predecessor, Arnoldo Aleman. Mr Bolanos' own Liberal Party has turned against him in congress, and joined forces with their former rivals, the left-wing Sandinistas. The election is being seen as a chance to end the pacts that have dominated Nicaraguan politics for some time.

2007 - China - - First lunar satellite
As part of China's Lunar Exploration Program "Chang'e 1" enters lunar orbit and on November 26th begins sending back pictures of the Moon to Earth as part of the projects goals to create three-dimen'sional images of the lunar surface.

2008 - Russia - - New missile deployment
Dmitry Medvedev announces that Russia will be placing short-range conventional warhead missiles in Kaliningrad as a counter to the United States missile defense facilities in Poland and the Czech Republic. Russia will be also be deploying short-range missiles to the Baltic Sea region near the border with Poland. These measures are due to the United States plans to build an anti-missile system in Europe. The proposed U.S. anti-missile system will include ten missile silos in Poland and a radar station in the Czech Republic is said to threaten Russia's national security.

2009 - United States - - Tribal Nations Conference
The White House Tribal Nations Conference at the Department of the Interior will have opening and closing remarks from the President, and discussions on everything from the jobs market to energy, housing and health care. His participation in the conference is said to be part of his outreach to the American people, and will be attended by the leaders of the 564 federally recognized tribes. These will have the opportunity to interact directly with the President and his Administration. The tribes have been invited to send one representative to the conference. This is the first annual White House Tribal Nations Conference.

2011 - Canada - - Canadian Dentist Buys John Lennon's Tooth
Canadian dentist, Michael Zuk, bought a tooth of John Lennon's that had been removed in the 1960's. Lennon had originally given the tooth to his housekeeper to dispose of or give to her daughter.

2012 - South Korea - - Nuclear Reactors Shut Down In South Korea
Two nuclear reactors were shut down in South Korea after it was found out that they were using parts that had not been approved. Shutting down the reactors meant that the country could face massive power shortages in the coming months.

2013 - India - - India Launches Mars Orbiter
India has successfully launched their Mars Orbiter Mission, hoping that they will become the fourth country to reach Mars. The spacecraft is expected to travel for three hundred days before reaching the planet.

Tatum O'Neal
Born: 5th November 1963 Los Angeles, United States
Known For : The youngest actress to win an Academy Award for Best Supporting Actress at the age of 10 for her role Addie Loggins in the movie Paper Moon, she is also known for having been married to John McEnroe in 1986 who many consider one of the most gifted tennis players in modern times. They were divorced in 1994. Like many young childhood stars over the years Tatum's personal life has been dogged by problems of drug abuse including heroin.

Peter Noone
Born: 5th November 1947 Manchester , England
Known For : Peter Noone is best known as "Herman" from the sixties rock group Herman's Hermits who had a number of hits on both sides of the Atlantic including "Mrs. Brown, You've Got a Lovely Daughter", "I'm Henry VIII, I Am", "There's a Kind of Hush" and "Wonderful World" to name just a few.