Important Events From This day in History January 5th

1945 - Kamikaze Pilots
1945: With Japan losing the war and most of the well trained pilots gone a new breed of pilots was born called kamikaze or Suicide Bombers these needed little training and could do great damage taking planes full of explosives and crash them into ships. At Okinawa, they sank 30 ships and killed almost 5,000 Americans.

1909 - Panama Independent State
An agreement was signed on this date between Columbia, Panama, and the United States to make Panama an independent state. According to one news source, part of the reason for the encouraged succession of Panama is the fact that Columbia had claims of damages against the United States.

1914 - $5.00 Per Day Wages At Ford
Henry Ford introduces a revolutionary pay deal when he introduces $5.00 per day wages for all his Ford workers. When asked about the pay he tells reporters that he wants his Ford workers to earn enough to be able to afford to buy a Ford motor car. 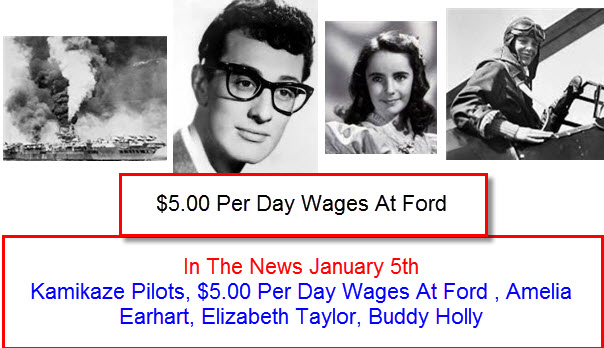 1939 - Amelia Earhart
Amelia Earhart is declared officially dead. No remains are ever found and circumstances of her disappearance are forever shrouded in mystery.

1949 - Fair Deal Speech
President Harry S. Truman gave his "fair deal speech". He expressed his thoughts on how every American should expect a "fair deal" from the U.S. government. His talk was in response to the New Deal policies that were set in place by President Franklin D. Roosevelt.

1959 - Middle East Cold War Zone
On this day, President Dwight D. Eisenhower established the Middle East as a Cold War battle ground. This happened in order to take action against communism.
One of the additional actions during this time period was also to have troops sent per request of the Lebanon government. Help was needed by the Lebanese who were suffering bouts of civil national strife.
The Middle East policy to take action that President Eisenhower had created was referred to as the "Eisenhower Doctrine". Many people believed in Eisenhower's ideals to control communism while others disagreed with it.

1959 - Buddy Holly
The record It Doesn't Matter Anymore was released by Buddy Holly on this day. Ironically, this was the last record before he died in a tragic accident that took his life as well as the life of Ritchie Valens and J.P. "The Big Bopper" Richardson.
Two months after Buddy Holly's death, his last record had reached as high as number 13 on the hit charts. Holly had written all his own songs and made what later was a standard musician setup of two guitars, a bass, and drums.

1968 - Czechoslovakia Prague Spring
Alexander Dubcek introduced a series of far-reaching political and economic reforms, including increased freedom of speech and the rehabilitation of political dissidents which became known as the "Prague Spring" . In August of that year the Soviet Union answered Dubcek's reforms with invasion of Czechoslovakia by 600,000 Warsaw Pact troops.

1970 - United Mine Workers
1970: United Mine union leader Jock Joblonski along with his wife and daughter were killed a week before this day. Their bodies were found on July 5th on the family's farm. Members of the United Mine Workers union leadership were hired for this "project"-the murder of this family.
This action brought down the moral of this entire union, which dissolved some time later. This was the beginning of the end of corruption that took place under the leadership of a man named Tony Boyle, former UMW President.

1972 - Space Shuttle Funding
President Richard Nixon signs a bill authorizing $5.5 million in funding to develop a space shuttle which would represented a giant leap forward in the technology of space travel The first shuttle Columbia is launched in 1981.

1976 - Ambush Workmen
A mini bus carrying Ten Protestant workmen was ambushed and they were killed as they were returning home from work in Northern Ireland.

1981 - YORKSHIRE RIPPER
A man has been arrested and appeared in court in connection to the 13 murders across West Yorkshire over the past five years, called by the tabloids the ( YORKSHIRE RIPPER ). Peter William Sutcliffe, of 6 Garden Lane, Bradford, was charged with the murder of 20 year old university student Jacqueline Hill, who was killed in Leeds seven weeks ago.

1982 - Landslide kills 33 people
1982 : A tragic landslide occurrence took place near San Francisco. It had killed 33 people, and had caused the closing of the Golden Gate Bridge.
Before this landslide took place, heavy rain fell for about 36 hours straight. Just from this one rainfall, San Francisco had received about half of its average annual precipitation.

1985 - Operation Moses
Operation Moses a secret operation by Israel to airlift thousands of Jewish Ethiopian refugees out of Sudan, has been suspended since news of the covert airlift became public.

1993 - American economy
The 103rd Congress met today to propose action. This action was to take place concerning the re-vitalization of the American economy, which was suffering at this time. Part of this plan of action had lead to the decision of making administrative changes within Congress.

1993 - Shetland Isle Scotland Ecological Disaster
The Liberian registered tanker MV Braer carrying 85,000 tonnes of crude oil has run aground in hurricane force winds off the Shetland Islands and large amounts of crude oil are spilling into the North Sea which could cause an ecological disaster in the area.

1993 - Ethiopia Peace Talks
1993: Peace talks were attempted in Addis, Ababa, Ethiopia. However, these talks lead to at least one person dying. The peace talks were originally initiated by UN Secretary-General Boutros Ghali to the Somalian Government.
Three times within five days angry crowds had gathered in response to the above-mentioned general's proposal. Rocks and garbage were thrown at the UN headquarters.
In addition to the one person reported as being killed, three police officers along with 13 other people were injured by gunshot. Additionally, 100 others were injured in the Melee.

1998 - Sonny Bono Dies
Sonny Bono, who used to sing with Cher, was killed in a skiing accident. He also made his way into politics as a Republican Congressman in 1994. Before that time he had become mayor of Palm Springs in 1988.
Before he entered into politics, he had become very famous-especially during the 1970s. During this time, he starred along with Cher in "The Sonny and Cher Show." He also recorded hits such as "I got You Babe" (1965), and received ten gold records during his career.

2001 - Harold Shipman
A public inquiry, chaired by Dame Janet Smith, was opened earlier this year and in it's final report it concludes the former GP Harold Shipman may have killed more than 300 of his patients making him the worst serial killer in British history

2009 - Tenth Day Of Israeli Attacks In Gaza
The Israeli assault against Hamas militants in Gaza enters its 10th day with air attacks against mosques, and the suspected homes of Hamas leaders, the death toll so far is put at more than 500 and diplomatic efforts are under way to end the Israeli Attacks on the area. The attacks are in retaliation for militant rocket attacks on towns and cities in Israel where 5 people have been killed.

2010 - Severe Weather Continues to Disrupt Public Transport
2010: The Severe Weather and one of the coldest snap in decades with Snowfalls up to 12 inches continues in the UK with more school and airport closings and severe disruption to the transport system. The weather has affected nearly all area's in the UK from Scotland down to the South Coast of Britain.

2010 - Obama verifies that Guantánamo Bay will be closing
Barack Obama has said the Yemen-linked plot to bomb an airliner over Detroit will not prevent the closure of the prison at Guantánamo Bay. The U.S. has suspended the repatriation of any Yemeni prisoners being held there. Nearly half of those remaining at Guantánamo Bay are from Yemen. Obama had originally set a deadline of January 22nd to close the camp, but this will not be happening.

2011 - United States House of Representatives Taken Over by Republicans
The United States House of Representatives is formally taken over by the new Republican majority after the 2010 mid- term elections. Republican John Boehner of Ohio became the new Speaker of the House and spoke of greater government accountability. The new Congress is expected to face many challenges as issues of budget and regulation changes are set to be addressed.

2012 - Brazil Dam Bursts Forcing Thousands to Evacuate
A dam near Campos de Goytacazes burst after a series of floods and landslides and forced the authorities to try to evacuate thousands of people before the flooding became too dangerous.
/>

2013 - Bushfires in Tasmania
2013 : Thousands of people were left stranded after bushfires devastated the island of Tasmania. Authorities believe that a combination of drought, a heatwave and high winds caused the fires.

2014 - Plane Makes Emergency Landing
2014 : A small plane carrying three people had to make an emergency landing in The Bronx borough of New York City after experiencing some engine failure. The plane had to land on the Major Deegan Expressway after traffic was stopped for a clear pathway.

Robert Duvall
Born: 5th January 1931 San Diego, California, U.S.
Known For : Robert Duvall is an American Actor, and Movie director best known for his roles in The Apostle as Euliss 'Sonny' Dewey — The Apostle E.F., The Great Santini, Tender Mercies as Mac Sledge for which he won his only Oscar for Best Actor. He was also in Apocalypse Now, The Eagle Has Landed, The Godfather, and Four Christmases. His TV career includes appearances in dozens of well known TV shows from times gone by including Route 66, Naked City, The Fugitive, The Twilight Zone and The Wild Wild West to name just a few.