Music Styles, Bands and Artists During the 1940's

Music during the 1940s was built around the jazz and big band styles that were popular. Artists like Rosemary Clooney, Count Basie, and Artie Shaw helped to define the musical era with their unique brand of entertaining crowds through their music. This was also the era of World War II, and many musical acts strived to reflect the pain that the country was going through while still remaining upbeat and positive about the impending future. The 1940s was a time for many breakthrough artists who made their mark in the history of music and several of them are still recognized as innovators in their day. Advancements like the invention of the solid body electric guitar by Les Paul in 1941 also influenced the styles that were popular.

Styles of Music Popular in the Forties

As it became clear that the United States would enter World War II, patriotism ran high and influenced pop culture, including the music industry. In 1938, Kate Smith released a version of Irving Berlin's song "God Bless America" which topped the charts and was subsequently released again in 1940 and 1942, remaining popular with each release. Artists like the Andrews Sisters and Bing Crosby released songs referencing the military and the war such as the Andrews' 1941 hit "Boogie Woogie Bugle Boy" and 1943 hit "Shoo Shoo Baby" and Crosby's "I'll Be Home for Christmas." Many songs addressed the war directly like Sammy Kaye's "Remember Pearl Harbor" from 1942 or Johnny Mercer’s "G.I. Jive" from 1944. If they did not directly reference the worldwide conflict, war-time songs would often allude to a sense of loss and longing, focusing on themes of distance between lovers and waiting for soldiers to return home (examples include 1944's "I'll Walk Alone" from Dinah Shore and the Mills Brothers' "Till Then"). Other songs focused on encouraging high morale by creating an upbeat image or satirizing the enemy like in the 1943 song "Der Fuehrer's Face" by Spike Jones and Kay Kyser's "Praise the Lord and Pass the Ammunition from the same year. Many of these songs were also featured in war-themed films at the time, which were abundant and popular. In 1941, the United States Service Organizations, also known as the U.S.O., were established just prior to the U.S. entry into World War II. Many of music's top names and entertainers contributed to the war effort by offering performances for the military and their families through U.S.O. performances. Some of the regular performers included Bing Crosby, Frank Sinatra, Judy Garland, Fred Astaire, Glenn Miller, Al Jolson, Irving Berlin, Lucille Ball, Dinah Shore, and Bob Hope who would become the face of the U.S.O. 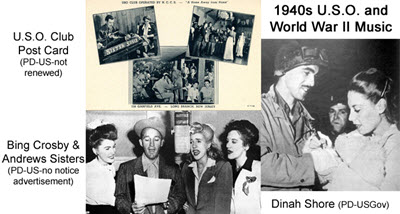 Big Band music, an offshoot of Swing and Traditional Jazz, was at the height of its popularity during the early 1940s. The genre focused on band leaders who often led four section musical ensembles with more than ten members. The four sections consisted of saxophones, trumpets, trombones, and rhythm (piano, bass, drums, and guitar). Big Band and Swing were somewhat interchangeable terms as Swing was often performed by Big Bands. The Dorsey Brothers (Tommy and Jimmy) best exemplified the genre as well as Glenn Miller. Band leaders worked on different arrangements of (often) the same songs and it was not uncommon to see the same song appear in the charts at the same time but by different artists. While improvisation was not necessarily of staple of Big Band, it was not an uncommon part of many live performances. Big Bands would often sign on short or long term engagements where they would perform night after night at certain clubs while touring the country, becoming an attracting as in the case of Duke Ellington, Benny Goodman, and Artie Shaw. After World War II however, many clubs opted in favor of hiring smaller bands due to the high cost of accommodating and compensating "Big Bands" which led to the disbanding of several of the decades most popular groups as they could no longer sustain a viable tour. Big Bands could have male or female singers, and many of the top artists of the decade performed with big bands prior to embarking on successful solo careers. Examples include Frank Sinatra (Harry James' Band and Tommy Dorsey Orchestra), Doris Day (the Les Brown Band), Billie Holiday (Artie Shaw and the Gramercy Five and the Count Basie Band), Ella Fitzgerald (Chick Webb Orchestra), Helen Forrest (Harry James' Band), Bob Eberly (Glenn Miller's Orchestra), and Dick Haymes (Tommy Dorsey Orchestra).

Latin-influenced and Latin American music became popular during the decade. Some artists were solo acts while others were a part of the Big Band scene as musicians (like Tito Puente and Enric Madriguera), singers (like Carmen Miranda), or band leaders (like Xavier Cugat and Vincent Lopez). The Latin sound was a popular staple of the dance scene and the Samba and Mambo were particularly influential during the 1940s. Some of the music was also Spanish-language, which grew in popularity as the Hispanic and Latino communities in the United States grew during the 1940s and 1950s. The quintessential Latin artist from the 1940s was the Brazilian singer Carmen Miranda, a super-star who appeared on Broadway, in numerous films, and frequently made radio and television appearances. Carmen Miranda was well-known for her look including her iconic fruit hat and head wraps. Some of her most notable songs of the decade included "When I Love, I Love," "I, Yi, Yi, Yi, Yi (I Like You Very Much)," "I Want My Mama," "Chica Chica Boom Chic," "South American Way," and "The Wedding Samba." 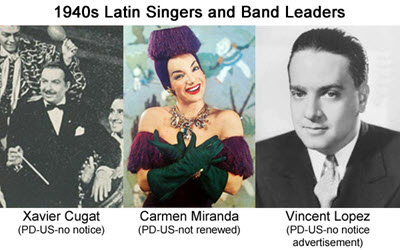 The Singing Cowboys of Country and Western

Country music became quite popular during the 1940s. It was previously referred to as the "Hillbilly" genre, and then the "folk and blues" genre on the music charts until the end of the decade when it was officially referenced as "Country and Western" music. The popularity of Western films bolstered the genre and "Singing Cowboy" film stars such as Roy Rogers and Gene Autry were also popular recording artists. Some of Gene Autry's biggest hits included "Don't Fence Me In" and "At Mail Call Today" from 1945, "Here Comes Santa Claus" and "Buttons and Bows" from 1948, and "Rudolph the Red-Nosed Reindeer" from 1949. Some of Roy Rogers biggest hits included "My Chickashay Gal" from 1947 and "Blue Shadows on the Trail" from 1948. Styles of Country music like Honky-Tonk were also popular during the decade with artists like Hank Williams and Ernest Tubb getting their start in the 1940s. Many mainstream popular artists jumped on the country wagon as well with Bing Crosby and the Andrews Sisters releasing country songs throughout the decade. Women in Country music were also popular during the decade artists like the Carter Sisters, Patsy Montana, and Jenny Lou Carson topping the country charts. 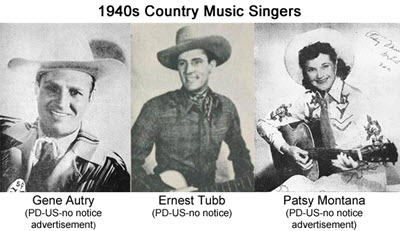 Popular Songs Each Year in the 40's

Popular songs from the Sixties Decade, arranged by year but in no particular order. Do you remember listening to these songs on the radio? 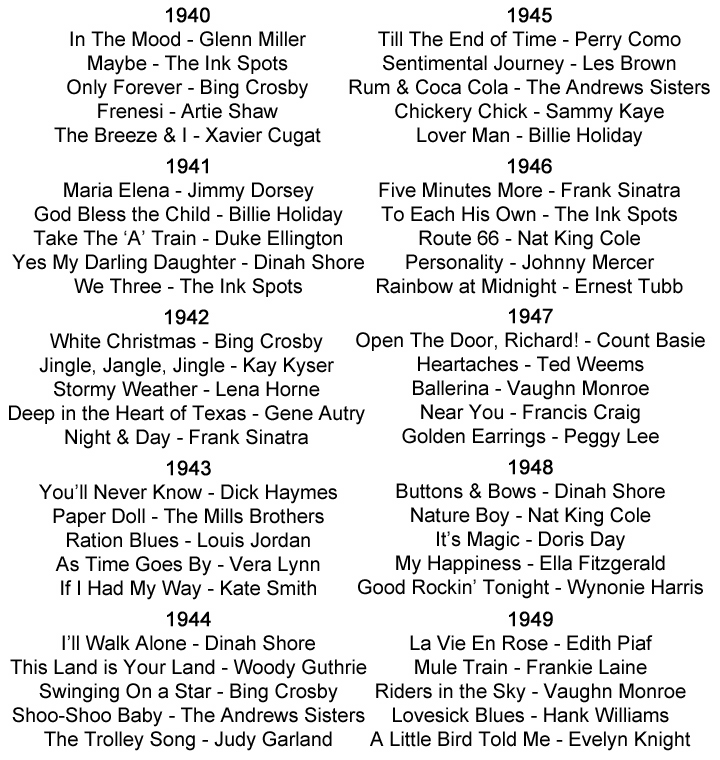