Music Styles, Bands and Artists During the 1930's

The 1930s were shaped by the contrasting moods of the Great Depression and the glamorous beginnings of Old Hollywood. Popular music was equally impacted by these forces and as home radios became more common, the music industry began to keep track of and measure the popularity of sheet music and records through sales. The radio program "Your Hit Parade" debuted in 1935 which showcased the most popular songs of the week. Billboard magazine also began publishing their "Hit Parade" on January 4, 1936 as a list of the most popular songs of the time.


Jazz music evolved into different styles with Swing and Big Band becoming prominent throughout the 1930s and the 1940s. Musical films influenced pop culture and many film stars were also popular singers of the time. Broadway creators moved to Hollywood and adapted their stage shows for a wider audience on the silver screen. Crooners and multi-media solo entertainers grabbed the attention of a younger audience and artists like Rudy Vallee were crowned as some of the first heart throbs, hosting their own shows on radio and making appearances in films all while churning out recorded hits of their own.

Styles of Music Popular in the Thirties

Musical films were an important part of popular music during the 1930s, offering a brief reprieve from the grim reality of the Great Depression and were an easy and affordable means of entertainment. These films opened a door to the glamorous world of Hollywood, showcasing song and dance numbers in front of a stylish background. There was a major boom in the production of musicals as the technology of adding synchronized sound improved dramatically following the release of the first talking picture, "The Jazz Singer," in 1927. Some of the most popular musical movies that were released during the 1930s include Bright Lights (1930), 42nd Street (1933), The Gay Divorcee (1934), Top Hat (1935), Showboat (1936), Alexander's Ragtime Band (1938), The Wizard of Oz (1939), and Babes In Arms (1939). Entertainers that appeared in these films were often well-rounded and had Vaudevillian or Broadway backgrounds to draw from. 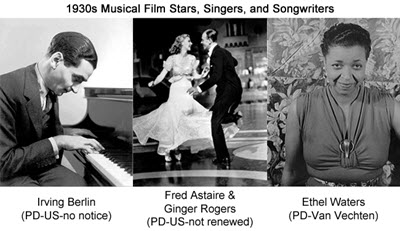 The early years of musical films attracted some of Broadway's biggest talents to Hollywood and several songwriters signed contracts with major film studios during the 1930s. Some of the creators that were drawn to Hollywood included Richard Rodgers, Lorenz Hart, Cole Porter, Oscar Hammerstein II, Irving Berlin, George and Ira Gershwin, and Jerome Kern. The implementation of the Production Code in 1934, establishing stricter standards for the content of films, seemed to stifle creativity in the business and could have been a factor in many of these creators deciding to return their focus to Broadway later in the decade. The musicals in the Thirties were also known for their elaborately choreographed dance numbers and some of the most iconic choreography came from Busby Berkeley. His films featured intricate and geometric placement of dancers and showgirls in what was called a kaleidoscopic shot, sometimes shown from an over-head angle.


Some of the biggest names in music either emerged from or dabbled in film musicals during the decade, many forging careers that would last several decades. Popular artists associated with the movie musical included Bing Crosby, Judy Garland, Ruth Etting, Eddie Cantor, Ethel Waters, Ethel Merman, Cab Calloway, Johnny Mercer, Shirley Temple, Mae West, Betty Grable, Joan Blondell, Irene Dunne, Carole Landis, and Dick Powell. The most popular and emblematic of the decade were Fred Astaire and Ginger Rogers who sang and danced together on screen as as two of the most famous stars in Hollywood. Fred Astaire and Ginger Rogers epitomized the multi-talented entertainers that took the decade by storm and they starred in 10 musical comedy films together (all were released in the 1930s except one). Some of their popular films were "Top Hat," "The Gay Divorcee," and "Swing Time."

An offshoot of the previously popular Jazz genre, Swing music (hand in hand with Big Band music) was developed near the end of the 1920s and it reached the height of its popularity from the mid-1930s to the early 1940s. Benny Goodman was often cited as introducing the style to the masses with his performances at the Palomar Ballroom beginning in 1935. Swing differed from traditional jazz in that the songs would often have a stronger driving force. They focused on the rhythm sections and allowed some improvisation while often featuring a soloist or vocalist prominently. The style was also adaptable with other genres as fusions with country and blues were also popular. Bandleaders like Chick Webb, Fletcher Henderson, Cab Calloway, Gene Krupa, Artie Shaw, and the Dorsey Brothers among many others were also important in the early establishment of swing and the popularization of the genre. Many bands created different arrangements of the same songs, leading to slightly different versions vying for popularity on the charts. Some of the most iconic 1930s songs of the swing era included "Begin the Beguine," "Minnie the Moocher," "It Don't Mean a Thing (If It Ain't Got That Swing)," and "Sing, Sing, Sing (With a Swing)." 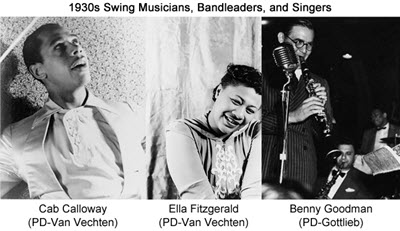 As with traditional jazz and many other popular music genres throughout the 20th Century, there was a racial component to swing with very little integration between black and white band leaders, band members, and vocalists. Many black bands were treated differently and denied credit and recognition for their contributions to the genre. Segregation and discrimination in the United States prevented many black swing bands from reaching the pinnacles of their careers but some band leaders like Cab Calloway and Count Basie and singers like Ella Fitzgerald and Billie Holiday attained mainstream success. Billie Holiday was notably hired as the first black female vocalist to tour the South with a white swing band when she joined Artie Shaw & His Orchestra in 1938.

Crooners and the First Pop Stars

While thought of as a derogatory term for singers of sentimental pop and jazz standards, many "Crooners," as they were called, became popular during the Thirties. The genre fit well with the style of radio at that moment and created some of the first music heart throbs, pop stars, and teen idols of the time. Artists like Bing Crosby, Russ Columbo, Hoagy Carmichael, and Rudy Vallee best represented the mostly male-dominated genre. Vallee was a ubiquitous voice of the decade, appearing in films and hosting his own radio program as well as recording hit songs like 1932's "Say It Isn't So" and "Brother Can You Spare a Dime?" (also recorded by Bing Crosby), and 1934's "P.S. I Love You." 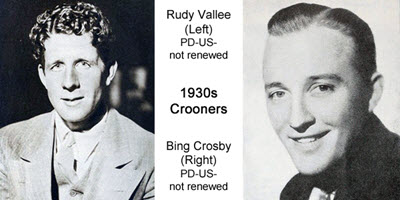 Bing Crosby, while not necessarily a teen idol type, was also considered a crooner and became one of the first multi-media stars. He was one of the best selling musicians of all time and certainly dominated the charts of the 1930s. Crosby got his start by recording with popular orchestras and soon found solo success with a weekly radio show. He belted out his hits on the air and they would quickly reach the top of the charts as listeners flocked to his distinctive bass-baritone voice. He began starring in several short films where he appeared as himself which helped launched his career. He remained popular throughout the 1940s and 1950s, getting larger roles on screen and still making waves as a hit-making recording artist and performer.

Popular Songs Each Year in the 30's

Popular songs from the Sixties Decade, arranged by year but in no particular order. Do you remember listening to these songs on the radio? 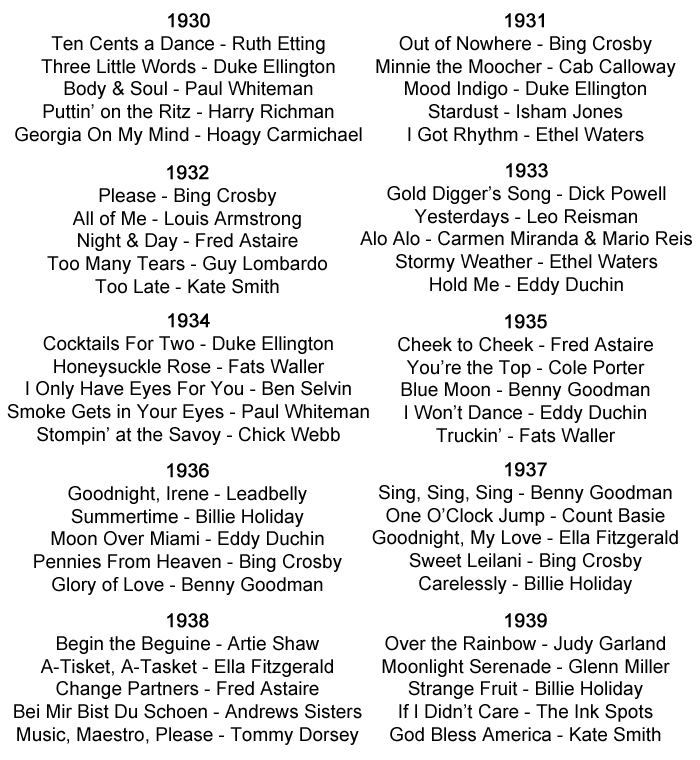