What Happened in 1929 Important News and Events, Key Technology and Popular Culture

The Wall Street Crash of 1929, is the stock-market crash that occurred starts on October 28th and started the period of The Great Depression in the United States, starting a world-wide economic crisis and lasting till the mid 1930's.

1. Leading up to the crash the United States experiences an economic boom during the 1920's. Many investors are speculators and the stock market keeps growing starting around 1923.

2. The stock market experiences a mini-crash on March 25th as investors start to sell their stocks. This crash reveals a shaky foundation in the market. Borrowing and credit is effected as interest rates climb to twenty percent.

3. Banker Charles E. Mitchell pledges $25 million in credit to stop the stock market slide a few days after the mini-crash. He is called upon to leave his post on the Federal Reserve Board for his interference with the market.

4. The economy shows signs of slowing as steel production, construction and car sales all experience decline during the spring. However, the stock market keeps climbing breaking records month after month, despite the signs of strain.

5. The Stock Market reaches its peak on September 3rd and the Dow Jones Industrial Average is at 381.17.

6. The market starts to fluctuate up and down, erratically during the month of September as speculators fear a crash.

7. The bubble bursts on October 24th, known as Black Thursday, when stock prices fall sharply with a reported loss of $5 billion on that day. Investors are assured that nothing is wrong and it will stabilize.

8. Black Monday happens on October 28th, when the U.S. stock market experiences its biggest drop in history, 22.6% in one day. This crash begins to influence other markets around the world.

9. Black Tuesday happens on October 29th, as panicked investors begin to sell all their stocks. The stock market drops another 12.8% by the end of the day.

10. The stock market hits bottom on November 23rd, and starts to stabilize after weeks of continuously falling.

12. In 1932, the U.S. stock market reaches its lowest point when it closes 89 percent down from its highest point .

The St. Valentine's Day Massacre took place on February 14th, in Chicago, Illinois. The massacre is likely related to criminal gang rivalry between Al Capone's gang and Bugs Moran's gang. Seven men associated with Bugs Moran's crime gang are murdered in the middle of the day by unknown gunmen.

Witnesses state they saw four men enter a garage on the North Side of the city, two of them dressed as police officers during the day. There was gun fire heard and then the four men exited, the two dressed as police escorting the other two at gunpoint. Police later discovered the bodies of the seven men who had been lined up against the wall and shot them with Tommy guns and other weapons.

It is likely that Al Capone was responsible for the brutal attack, however he was never held accountable for it nor did he ever admit to any involvement as he was in Florida at the time of the massacre.

1. The Museum of Modern Art (MoMA) is created in New York City in November .

2. It was originally located in the Heckscher Building on Fifth Avenue and only had six rooms.

5. The new building was in the "International Style" of architecture which features rectangular lines, very little decoration, glass and steel, and open interiors.

6. The location was closed in 2002 as remodeling and additions were being created for the building.

7. The new and renovated Museum of Modern Art reopened in November of 2004 where it now has six floors of different galleries.

The San Francisco Bay Toll Bridge, also known as the San Mateo-Hayward Bridge, opens during March. When the bridge opened it was the longest bridge in the world spanning a length of about seven miles and it originally had just two lanes for traffic. It cost about $7.5 million to build and the original toll was 45 cents per vehicle plus an extra 10 cents per passenger. By the 1950s and 1960s the bridge could no longer keep up with the high volume of traffic and a new bridge was completed in 1967.

Vatican City gains independence from Italy on June 7th and is created as its own State.

The Holy See and Italy sign the Lateran Pacts on February 11th, . This created the Vatican City State. The Pacts were ratified on June 7th, of that year, officially making Vatican City a sovereign state under international law.

The entire area of Vatican City lies within the city of Rome and it measures about 110 acres. The city holds many Catholic cultural sites and is ruled by the Pope and high-ranking Catholic clergy.

In the late 1800's the King of Italy's attempts to unify the country left much question over the role of the Pope and many papal properties were seized by the King. Up until 1929, when the dispute was resolved, the various Popes did not leave the Vatican compound and did not recognize the Italian royalty's right to rule in Rome.

The very first Academy Awards, also known as the Oscars, were presented on May 16th. It was a relatively small private event compared to the more modern televised affair. There were about 270 attendees and the ceremony was held at the Hollywood Roosevelt Hotel. The short, 15 minute ceremony was hosted by actor Douglas Fairbanks Sr. and a total of 12 awards were presented. Fairbanks was also the first president of the Academy of Motion Picture Arts and Sciences, the group responsible for choosing the nominees and winners. The first film to win “Outstanding Picture,” now known as “Best Picture,” was the 1927 silent film Wings.

The first running of the Monaco Grand Prix Formula One race was held during April. The race was created and organized by Antony Noghes and the Automobile Club de Monaco. The circuit of the race winds through the streets of Monaco for a little over 2 miles and is run for 78 laps. There are several tight corners, elevation changes, and a tunnel, making it one of the more dangerous courses in Formula One racing. The first race was won by British driver William Grover-Williams who drove a Bugatti Type 35B. 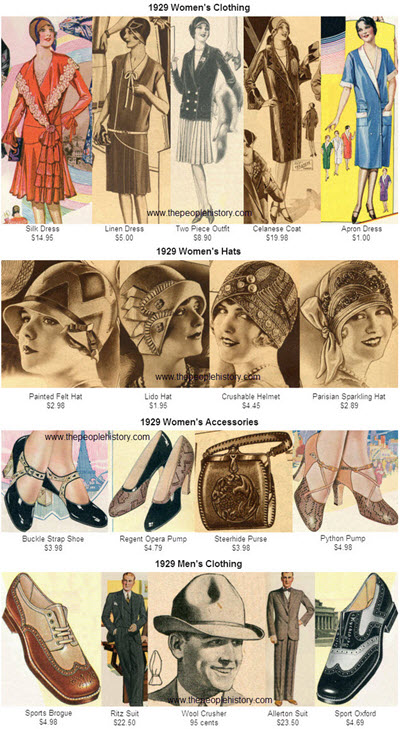 The first car radio is made by Motorola.

The growth of Airplane travel continues with flights to destinations further and further apart including India, Australia, Europe, North and South America and Asia.

Edwin Hubble continued to publish much of the foundations for understanding our galaxies and much of the theory that modern astronomy is based on (Possibly why the Hubble Space Telescope was named after him).

Sunglasses Sam Foster begins selling sunglasses from his counter in Woolworths on the boardwalk in Atlanta which are great hit with the sunbathing public. 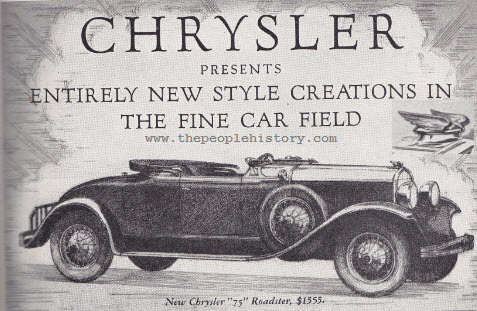 
The new Chrysler 75 Roadster for 1928, one the most attractive cars of our times made by master craftsmen entering a new era in design and craftsmanship.

In August, British inventor John Logie Baird began conducting experimental television broadcasts at the British Broadcasting Company. Baird tested his 30-line television system and the BBC used the opportunity to gauge the viability of this new medium. Baird’s system did not last long after that as other inventors and potential retailers began to surpass his technology with their own systems.

The iconic character of “Popeye the Sailor” made his debut appearance during January in the “Thimble Theatre” comic strip. Created by Elzie Crisler Segar, the character proved to be quite popular and soon became the focus of the Thimble Theatre comic strip. The comic had been created ten years earlier and had originally focused on Olive Oyl, who eventually became Popeye’s girlfriend. The comics were adapted into an animated series by Max Fleischer in 1933 and the popularity of the character remained steady throughout the following decades. Popeye is often credited with encouraging children’s vegetable consumption as the cartoon version relied on eating a can of spinach to increase his strength in dangerous situations.

During July, one of the largest attempts at international peacekeeping was made when the Kellogg-Briand Pact became effective. The Kellogg-Briand Pact, also known as the Paris Pact, outlawed war as a means of national policy and worldwide conflict resolution and was born out of the devastation and destruction caused by the First World War. Almost all of the world’s nations signed the pact, agreeing to outlaw war, but the ambitious agreement turned out to be ultimately ineffective. Unfortunately, every nation seemed to have a different interpretation of the terms and there was no clear means to enforce the pact leading to its failure.


Dow Reaches Peak of 381.17 on September 3rd prior to the slide and eventual wall street crash in October.


The United States and Canada sign an agreement to protect Niagara Falls.


Colonial Charles Lindberg leaves on a 3,500-mile flight from Detroit to Cape Horn.


The first car radio is made by Motorola.


Academy Awards, popularly known as the Oscars, are started.


A start is made on the Rockefeller Center in New York


The Broadway Melody becomes the first major musical film of the sound era.


The soft Drink 7-up is invented by Charles Leiper Grigg. 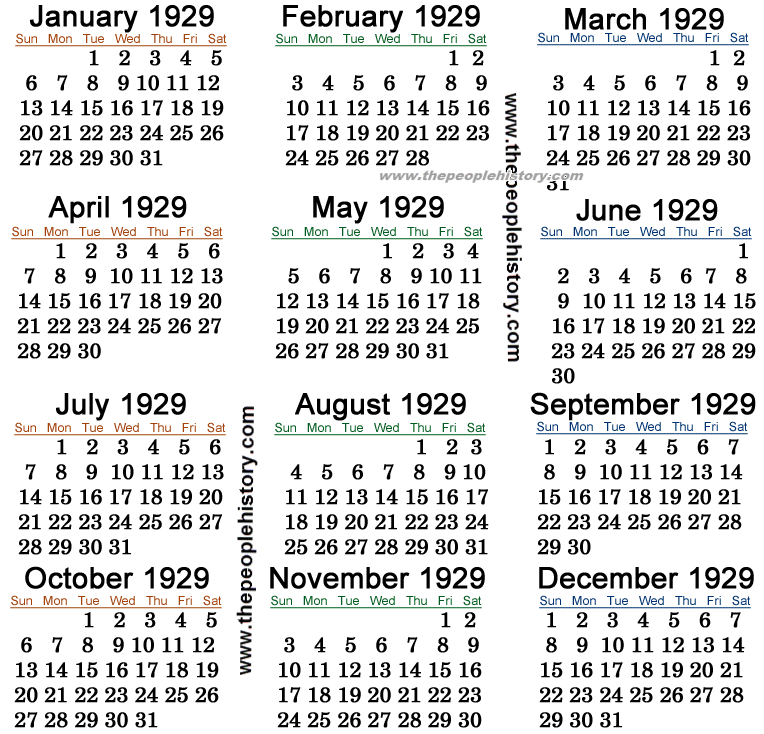