Charles Lindbergh flies The Spirit of St. Louis across the Atlantic nonstop and solo, direct from New York City to Paris, as the first solo transatlantic flight.
1. French-born New York Hotel Owner Raymond Orteig offers $25,000 Orteig Prize.
2. First successful nonstop flight made in either direction between NYC and Paris.
3. Six aviators lost their lives in pursuit of the Orteig Prize Prior To Lindbergh.
4. Charles Lindbergh's Plane was "The Spirit of St. Louis" built by Ryan Aeronautical Company.
5. The plane was a fabric covered, single-seat, single-engine "Ryan NYP" high wing monoplane.
5. Lindbergh took off in The Spirit of St. Louis from Roosevelt Airfield, Long Island, New York 6:52 AM EST on May 20th .
6. Arrives Le Bourget Aerodrome, Paris after 33 hours, 29 minutes 5:22 PM EST, May 21st,
The feat of Charles Lindbergh was even more remarkable when you realize that 1 in every 2 pilots who attempted crossing the Atlantic was killed during the attempt. Governments around the world were looking at some form of Pilots License being implemented.

Henry Ford reveals the Ford Motor Company’s newest vehicle, the Model A, during December. In May of that year Ford announced that all production of their famous Model T had ended and that all factories would be dedicated to creating a more innovative and exciting vehicle. Ranging in price from $500 to $1,200, the Model A debuted with 7 different body types and was available in 4 different colors. Its new features included a safety glass windshield, 4-wheel brakes, and hydraulic shock absorbers. It was also the first to feature the iconic blue oval logo badge. They reportedly sold over 400,000 vehicles in the first 2 weeks after its debut.

The official ceremony for the opening of the Peace Bridge connecting Canada to the United States was held on August 7th. Located just a few miles away from Niagara Falls, the bridged spanned 5,800 feet across the Niagara River and connected Buffalo, New York in the United States to Fort Erie, Ontario in Canada. Construction on the three-lane bridge began in 1925 and was overseen by engineer Edward Lupfer with a budget of $4.5 million. By March the bridge was completed and in June it was opened to the public prior to its official dedication.

The Jazz Singer opens October 6th and becomes a huge success, marking the end of the silent film era.
The first film to feature synchronized dialogue, "The Jazz Singer" debuts in New York City during October . The movie features Al Jolson, a popular Broadway performer and singer, in the lead role of "Jack Robin" The story focuses on Robin's struggles with his cultural identity while pursuing a career in entertainment. The film is credited with ushering in the age of "Talkies" as silent films became less popular and technology advanced. It is also ranked as one of the most notable American films.

The Lockheed Aircraft Company introduced the first Vega monoplane during July. The Vega became a favorite plane of early pilots who were looking to set records as it was designed to be sturdy and safe while also being lightweight and fast. The 6-seat plane was designed by Jack Northrup who would go on to found several aircraft companies and would later work for the Douglas Aircraft Company. Some of the famous aviators known for using Vega planes to accomplish their feats and set records included Amelia Earhart, Wiley Post, and Charles Lindbergh.

The Columbia Broadcasting System (CBS) was created during September. The company was created by former talent agent Arthur Judson and was originally a radio network. The network’s first president was William S. Paley. Under Paley’s direction the network quickly grew into one of the most popular radio networks in the country. CBS began experimenting with television in the 1930s but would not be able to develop it more until the late 1940s after the end of World War II.

1. The U.S. Supreme Court ruled on the Nixon v. Herndon case during March .
2. In the case, the Supreme Court declared a Texas law that prohibited black voters from participating in the state’s primary elections to be unconstitutional.
3. The court stated that the Texas law violated the Equal Protection clause of the Fourteenth Amendment.
4. The vote was unanimous, and Justice Oliver Wendell Holmes delivered the opinion.
5. However, the ruling was not particularly effective and the state passed a new law that maintained the white primary system, circumventing the verdict.
6. The white only primary system would not be fully dismantled until 1944 with the Smith v. Allwright Supreme Court decision.

The Great Mississippi Flood affects 700,000 people in the greatest national disaster in US history.
1. Heavy Rain began in the late summer, a year before in 1926.
2. On April 15th, 15 inches of rain fell in 18 hours.
3. April 15th, the Mississippi River broke out of its levee system at 145 locations.
4. Water flooded an area of twenty-seven thousand square miles.
5. States affected included AR, IL, KY, LA, MS, MO, TN, TX, OK and KS.
6. Worst affected was Arkansas, 14% of the state was flooded.
7. Following the disaster the Flood Control Act of 1928 created the world's longest system of levees.

Striking miners from the Columbine Mine are massacred with machine gun fire at Serene.
1. Columbine Mine is in Serene, Colorado.
2. Miners Began Strike 5 weeks earlier at coal mines in the state of Colorado.
3. Strikers and their wives arrive at the north gate on November 21st on route to the town for a morning rally.
4. The Head of the Colorado Rangers, Louis Scherf tells strikers are not allowed into town.
5. Strike leader Adam Bell stepped forward and asked that the gate be unlocked.
6. When the gate was kept locked, the miners forced their way through the wooden gate.
7. Miners are fired on by machine guns leaving six strikers dead and many more injured.

78 children are killed during The Laurier Palace Theatre fire on January 9th in Montreal, Canada when they die in the stampede or are asphyxiated.
1. The Laurier Palace Theatre was a small movie theatre in Montreal, Quebec, Canada.
2. 800 children were watching an afternoon matinee movie called Get 'Em Young.
3. 78 children died in the tragedy 12 were crushed, 64 asphyxiated; only 2 died from the fire itself.

The silent film "It" was released to the general public during February . The film starred Clara Bow, the embodiment of the modern Flapper girl, and was a success with critics and the public. "It" turned the very young Clara Bow from a movie star into a legend. She was known from then on as "The It Girl" and the phrase became a fixture of public vocabulary, used to describe a woman with a mysteriously attractive quality that cannot be defined. The movie, a romantic comedy, was later selected for preservation by the Library of Congress.

The cult classic silent film “Metropolis” debuted in Berlin during January . The German science fiction film’s plot revolved around a futuristic Utopian city where all was not as it seemed and it was directed by Fritz Lang. The movie was not well-received with critics at the time and H.G. Wells, master of science fiction writing, wrote a long and cutting negative review of the film a few months after its release. The film has since gained a cult following and many now consider it a cutting-edge film during the time it was created.

UK -- Influenza Epidemic
In Britain, a 1000 people a week die from influenza epidemic. 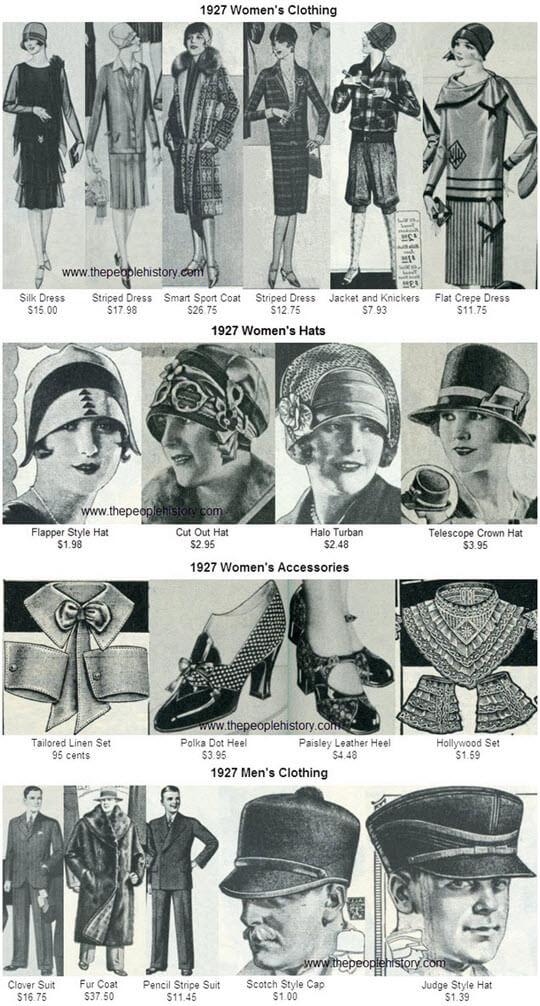 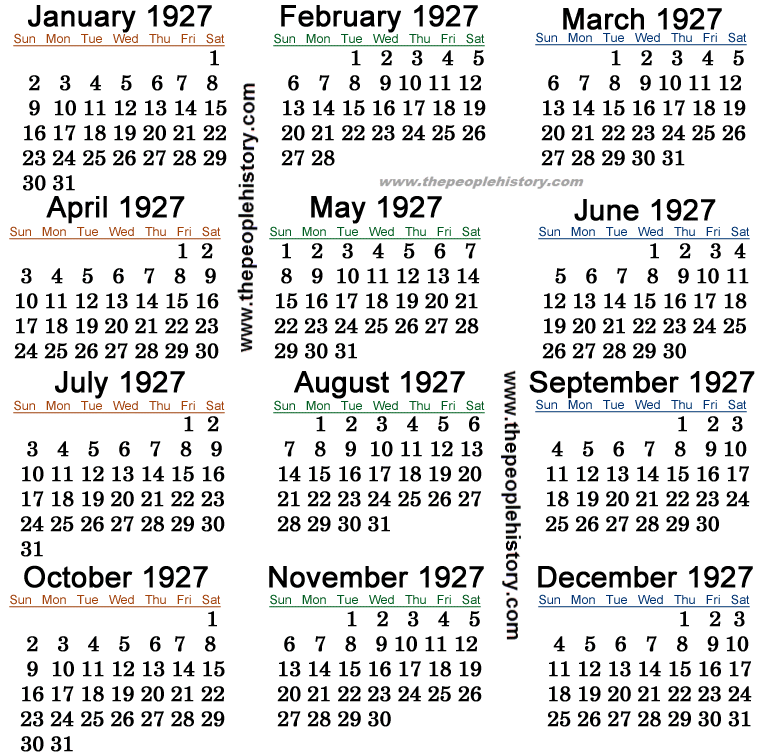 1927 Cost Of Living Guide To How How Much things cost

A child's toy steam engineToy Steam Engine $3.98
Not everybody had electricity so these hand cranked washing machines were still sold
Manual Washing Machine $15.95
For city dwellers who had electricity an Electric Washing Machine
Electric Washing Machine $79.00
Other Camera's were available but the box brownie was still popular
Kodak Box Brownie Camera $2.29
The astounding thing about this Radio was the price (about $1,000 in today's money)
Radio Receiver $74.95
1920's Ranges were not only used for cooking but a form of heating so were left on all day
Wood Fired Kitchen Range $69.85

Inventions / Inventors / Country (or attributed to first use) 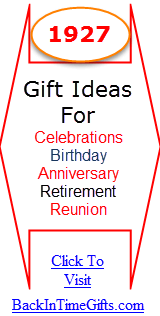